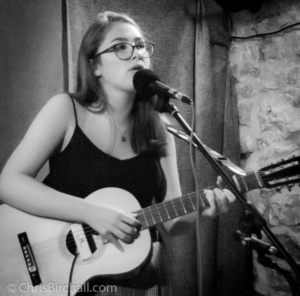 Twelve months last May, a shy fifteen year old turned up to one of our Singers’ Nights armed with a guitar and two songs.

Since then we have watched her blossom as a performer, growing in confidence and developing her vocal and guitar-playing skills to the point where she has found herself performing at many events locally, including this year’s Graig Aid festival. And earlier in the year, opening at Rhyl Pavilion for the award-winning Scottish band, Skerryvore.

Having invited Fuchsia Jones to perform an extended spot at the club, we were delighted to see the function room at The Feathers packed with an appreciative audience as she showcased half a dozen or so of the songs that have defined her musical journey. 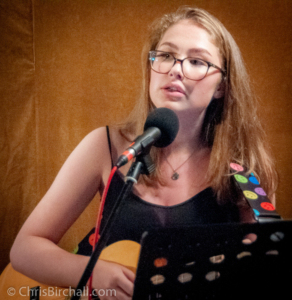 That audience included her family, of course, as well as her guitar tutor, Skeet Williams, who sat with baited breath as she opened her set with the lovely Welsh language song “Dy Lygaid Di”, written by Gwyneth Glyn.

She followed up with songs by Britney Spears, Ed Sheeran and Laura Marling

“Wicked Game”, by Chris Isaac, had been one of the very first songs on her first visit, along with Ray Lamontagne’s “Jolene”. Both had pride of place in tonight’s showcase which she drew to its conclusion with Paolo Nutini’s “One Day”.

Floor Spots
The evening had begun with floor spots from nine musicians performing up to three songs each. We had “Carolina Star” from Lynda Degney, and her husband Tom delivered a protest song “For What It’s Worth” written by Stephen Stills.

It was good to welcome back two members who we’d not seen in a while. Peter Stevens gave us John Denver’s “Leaving on a Jet Plane” and “The Contender” (made famous by Christy Moore). Ron (from Wrexham) Stevenson sang the Russ Hamilton 1957 hit “We Will Make Love2, and the Five Penny Piece number “Ee By Gum”.

Fuchsia’s sister Scarlet has performed at the club once before and tonight we were treated to a lovely a cappella rendition of the Welsh language classic “Ar Hyd Yr Nos”.

It was Richard Ruthin who brought both the first and second rounds of floor spots to a close, doing so with “Moonshiner”, and the rousing classic “Putting on the Style” in the lively style of the ‘king of skiffle’,  Lonnie Donegan.

Finale time was upon us, so we brought Fuchsia back on stage to sing “Creep”, by Radiohead’s Thom Yorke, and for an encore, “Liability” by the New Zealand singer, Lorde.