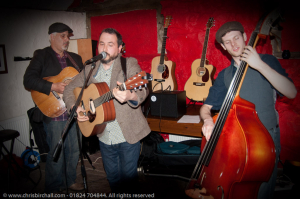 Gary Edward Jones is a talented and accomplished singer/songwriter from Liverpool who, since a chance meeting  with Skeet Williams at a festival last year, and hooking up with freelance bass player Oscar South, has been churning out a vast amount of new material that will form the basis of their forthcoming album The Cabinet Maker.

On hearing Gary was coming to our club to perform a showcase, I checked out his Reverbnation channel.  I was greeted by a set of beautifully produced recordings.  Lovely melodic original songs containing beautiful meaningful lyrics sung with a warm, honey-soft voice. 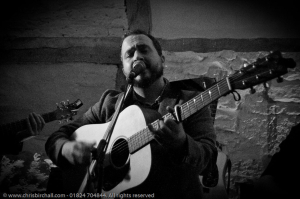 I surmised that if their live performance proved half as good as the recordings, we would be in for a treat.

Well they were not half as good – they were just as good.  In fact I’d go further than that and say their live performances were even better!  What we experienced upstairs in the Cross Keys sounded just like the immaculate, professionally engineered recordings but with the added multiple dimensions that you only get when listening to music live.  No pedals. No effects. Just one voice, two guitars and an acoustic double bass in perfect harmony. 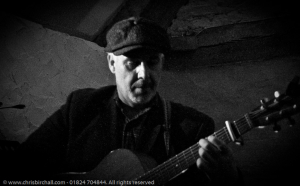 What made it even more special for us in Ruthin, was the fact it was our own Skeet from Bettws GG, a frequent visitor to Ruthin AllStyles in recent years, who joined forces with Gary.  Skeet’s effortless mastery of the fretboard, inserting delicate understated riffs into Gary’s songs, and Oscar’s solid and steady bass line, perfectly complimented the main man’s own guitar skills.

Rarely do you get three musicians that gel together so effortlessly.  And have done so, it seems, right from their first meeting less than a year ago. 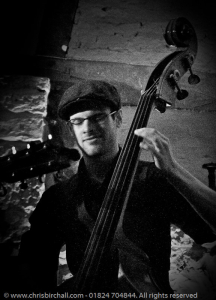 The trio performed two 45 minute slots for us, one at the start of the evening and the other to take us up to the close.  The finale included two songs that have become my personal favourites:  Free Falling and Dreaming.

Between the two slots many of the club regulars performed.  This format seemed to work well and it is something we hope to continue doing when we have guests appearing in the future.  What was a really nice touch, appreciated by all who played,was that Gary, Oscar and Skeet remained in the audience  during our performances instead of scurrying off to the bar.

We had a couple of numbers each  numbers from John Ryder, Tom & Linda, Richard, Joe, Phil Townson, Stephen and ‘yours truly’.  Plus a lovely rendition of a Robbie Williams song by a first-time visitor to the club, 10 year old Ella Jones.

It truly was a fabulous evening of music, much appreciated by a capacity audience.