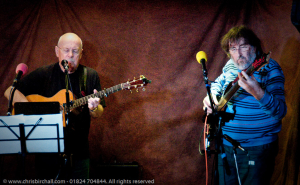 Another great night of music at The Feathers.

Tom, Dick and Harry plus John got the show off to a great start with a blinding set that saw Richard being handed down his Walking Cane and Harry checking into the Hotel California. Tom’s mandolin and dobro accompaniment, together with John’s solid bass line made for a fabulous rounded and polished sound.

Tom then remained on a stage, swapping to the six string acoustic guitar to accompany Lynda.

Chris then did a set on the 12 string which included Neil Young’s Old Man. 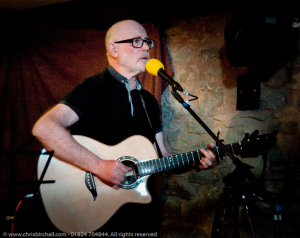 Next up we had a new face. Mike and his wife Linda who live in Reading were holidaying in North Wales and found our club on t’internet.

With Linda providing backing vocals on a couple of numbers, he delivered a fine set which included a song he’d written following a visit to Eastbourne where he’d been inspired by the inscription on a 1940’s gravestone.  It was a tale about the needless loss of life at the start of the war due to a lack of air raid warnings.

Mike, who lived in North Wales back in his youth, apologised that many of his songs were ‘protest songs’ with death and destruction at their heart. No apology was needed as his performance was damn good. And anyway…  are not a large majority of the best folk songs written about dark subject matter?

By way of contrast, he finished his set with a lovely song written about the love of his life, Linda, and their fifty years together. 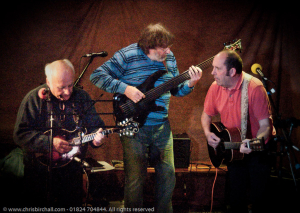 Then we had Colin from Leeswood and local lad Mike Kendrick who both performed a couple of fine sets.  Mike plays in two bands, The Dansette Alligators and another (whose name eludes me!). Nevertheless, he formed yet another in the shape of a new impromptu trio for this week’s finale spot by recruiting the club’s most versatile musicians, Tom on mandolin and John Bass.

They put on a polished performance that totally belied the fact they had absolutely no rehearsal together.

Next week we have The Hedge Gods who will be doing a 30 minute Showcase spot. Plenty of time for the usual floor spots so bring your instruments as normal for another great night’s entertainment!

May 14th Singer’s Night The Gods were smiling on us