How gratifying to see our little club bursting at the seams for Merry Hell’s first showcase at The Feathers.

Thirty five of our members were joined by twenty five visitors from far and wide who had purchased tickets on-line. They came from Conwy and beyond, from over the border in Nantwich and one couple even travelled from Sheffield, such is the draw of this fantastic folk rock band. 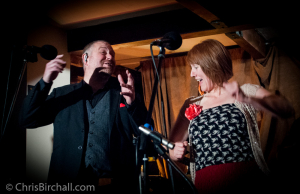 After a five minute beer break all Merry Hell erupted as the three talented Kettle brothers John, Andrew and Bob burst straight into the energetic “Dreaming of the Time” with John’s wife Virginia sharing the lead vocal with Andrew.

They continued in a similar vein with the catchy “Let’s Not Have a Morning After” then their swipe at the Bankers, “Crooked Man”, before slowing things down a touch with “Allendale” in which Andrew sidelines his distinctive gritty voice in favour of softer melodic tones for this beautiful ballad. 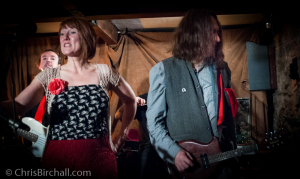 Next up Virginia grabbed a guitar and injected fun and hilarity into the proceedings with “Bury Me Naked” a song which I swear would give Britain its first win in ages if it were entered into the Eurovision Song Contest.

It is upbeat, fun and catchy, and knocks spots off anything we’ve heard on Eurovision since Katrina and the Waves’s 1997 winning entry. 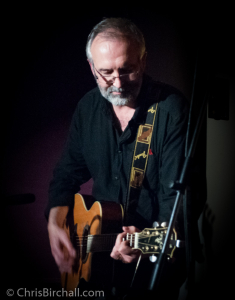 “Lean on Me” and “Hope You Don’t Mind” were followed by the title track off their new album “Ghost in Our House” and Virginia related the tale of how they had to convince their young son that they were really singing there’s a goat in our house so that he wouldn’t be afraid of the dark!

More of their old favourites followed, with “Finest Hour” bringing their first set to a close.

Richard and Wendy opened the second half of the evening followed by Tim, Cath, Geoff, Glyn, Penni and Chris before our headliners took to the stage once more. 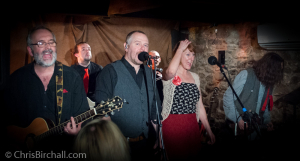 This popular Wigan based folk rock band last appeared in Ruthin in 2013 at our previous venue, The Cross Keys.

Although the Feathers is no stadium, it does afford twice the audience capacity and whilst still not large enough to accommodate the full eight-piece band, Merry Hell were at least able to supplement their acoustic(ish) line up with bass player Nick Davies and Neil McCartney on violin. Ironically, their drummer Andy Jones actually lives in Ruthin but there was just no room at the inn! Nevertheless, it was good to see Andy make an appearance, even if it was just to look after the merchandise table.

The band’s second set began with the lovely ballad “Emerald Green” followed by a whole raft of upbeat favourites.  It wouldn’t have been a Merry Hell gig without “Drunken Serenade”, “Build and Mansion” and “Lovin’ The Skin You’re In”. 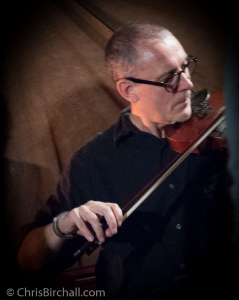 “One More Day Without You” was to have been their last song – but the Ruthin AllStyles audience were having none of it. After all the shouts of “More” had died down, an extended violin solo intro from Neil led straight into the punchy “Let The Music Speak For Itself”. A truly fitting encore that flowed seamlessly into the (by now obligatory) foot-stomping “Raising Merry Hell” finale.

It was a night of Merry Hell at their very best. Energetic, uplifting, funny, entertaining, inspirational – all these words and more describe this band. Their twenty-two songs planted twenty-two earworms. Three days later and I still can’t get their songs out of my head.

What the Hell – I don’t want to get their songs out of my head! 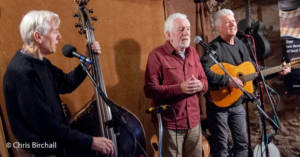