Following on from last week’s Jon Coley concert, it was back to normal with our regular Thursday Singers’ Night.

Not that there is anything wrong with normal. We are so lucky at Ruthin AllStyles, to have a vast number of musicians frequent our weekly sessions in the function room at The Feathers.

In addition to a small core of die-hards who we see on a regular basis, there are those we might see once a month or so, those who we might see once in a blue moon and, of course, the steady trickle of new faces.

And with them comes a wonderfully diverse range of styles and genre, helping the club live up to its ‘AllStyles’ epithet.

The evening was opened by Carmarthenshire lass Tara Crank who was making her third visit to the club, bringing with her a unique and personal interpretation of songs by Joni Mitchell and Lisa Hannigan, complimenting a sweet and pure voice with some rather nifty guitar work.

Then she served up a lovely cover of the 1980s song by The Chieftains, “My Lagan Love”, singing a cappella, interspersed by some beautiful solo passages on her violin.

Two ladies making their AllStyles debut were Carol and Dawn, who we have seen a time or two at the Rhyl club. They recruited Richard Davies as second guitar for the Kate Wolf song “Across The Great Divide”, following up with “Roseville Fair” by Bill Staines. 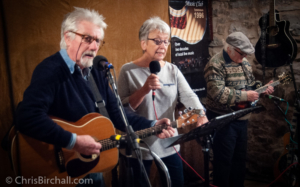 Richard was kept busy, joining Tom Degney to accompany Enid Toft on the lovely traditional Welsh song “Myfanwy” as well as both doing their own spots.

And before we knew it, the evening drew to a close with an encore from Tara singing one of her own compositions, “Postcards”.

See you all again next Thursday.