“What a Great Night”, “Exceptional”, “Terrific Performance”, “So Talented”, “All This for a Fiver!”.  The plaudits came thick and fast, both on the night and afterwards in messages and on Social Media. 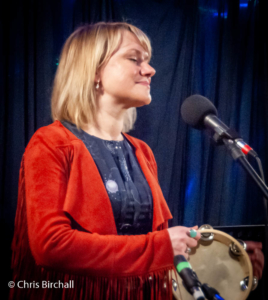 And justifiably so. Sarah Lou and Jimmy Rae put on such an excellent and varied show, they had the capacity audience captivated from the very first note to the final chord.

Tennessee Waltz is billed as a ‘contemporary country duo’ whereas, in fact, they are so much more. Throw into the mix, a helping of Americana, R&B, Modern Folk and even Rock ‘n Roll, and you get a clue as to why this endearing duo appeal to so many people.

Jimmy has written so many great songs over the years, from the lively “Four in the Morning”, the tongue-in-cheek “Stick Your Rotten Job”, to the touching ballad “Under the Mersey Moon”, plus many more, including a lovely song written with Sarah Lou, called “One of the Good Guys”. 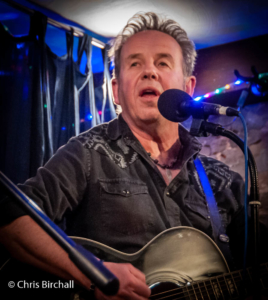 As wonderful as these songs are, they were cleverly interspersed with popular covers guaranteed to get the audience singing along. These featured the work of some of the country greats from the last 50 years, such as Johnny Cash, Willy Nelson, Patsy Cline, the Everly Brothers and The Eagles.

The very first time Jimmy and Sara Lou visited Ruthin AllStyles was on a Singers’ Night three years ago. On that occasion, they performed a song Jimmy had written after watching an interview with Eddie Cochran’s mother who was clutching onto her dead son’s guitar. This touching ballad “Eddie’s Guitar” segued into the late rocker’s “Summertime Blues”. I was so pleased they did it again this week, especially as they tagged “Come On Everybody” onto the end of it.
​ 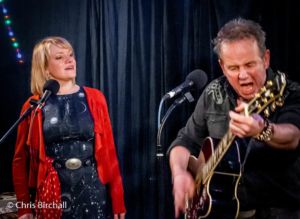 With polished performances throughout, complimented by superb vocal harmonies, the end of the evening seemed to come far too soon. An encore was called for and was fulfilled with the John Denver classic “Country Roads” – with the entire room joining in the chorus.

As always, the first and second halves of the evening had begun with a round of floor spots and this week, those doing the honours were: Lynda and Tom Degney, Glyn Hudson, Richard Ruthin, Joe Lyon, Chris Birchall, Skeet Williams, Deborah Jackson and Brian Peters who was also roped in to play harmonica on one of Tennessee Waltz’s blues numbers.

If you missed the gig, here’s a little taste of what you missed…