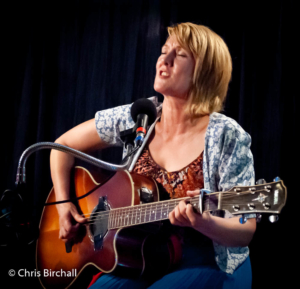 For Ruthin Festival Week we always try to do something special and this year we ended up with something very special.

Back in the club’s early years, when it was called Ruthin Folk Club, with The White Horse as it’s meeting place, Virginia Barrett, as she was back then, opened for none other than Kevin Dempsey and Joe Broughton of The Urban Folk Quartet.

Since then she has appeared at the club on numerous occasions as part of Merry Hell, as well as with her side-project Virginia and the Dreamkeepers, so it was lovely to have her back simply as Virginia, with just her acoustic guitar, to treat us to a lovely intimate concert. 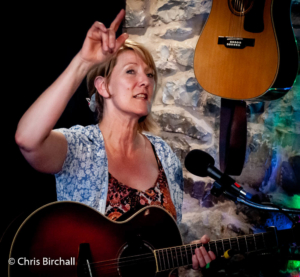 The prolific songwriter that she is, we were treated to an evening filled with a fine blend of covers and original material including many of the familiar numbers that Virginia has written for Merry Hell.

She opened her first set with “Nobody Knows Me Like You” written for the band’s 2014 EP “The Ghost”, followed by a song about children growing up and leaving home, “Growing, Growing Gone”. And then a stripped-back a cappella version of “Bloodlines” from the album of the same name.

“Everybody Needs a Little Warm” was next from this lady who herself ouses ‘warm’, both in the lyrics of her songs and in their delivery. Her warm personality carries through to the tales she tells, along with the back-stories to her songs. She also has a wonderful way of engaging with the audience, who responded by enthusiastically joining in on many of the choruses. To this end, a prompt board, creatively constructed in the style of a ransom note, helped us through one of the more lengthy choruses. 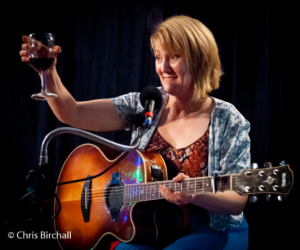 For her song “Violet” she displayed a photo of  Annalisa Flanagan, a young primary school teacher who holds the world record for having the loudest recorded voice, reaching 121 decibels, and was the inspiration for the song.

The Audio-Visual continued with a glass of red magically appearing for a song that featured wine. The trend didn’t, however, extend to her rendition of “Bury Me Naked”. 😉

Virginia concluded her final set with a lovely acoustic version of the Waterboys’ 1985 hit “The Whole of the Moon” and then for an encore it was a bluesy number, “Straight Down the Middle”. It was a fine earworm upon which to end a fabulous evening with this lovely and talented lady.

As always, of course, we had some songs from a selection of our regulars to open both halves of the evening, twelve in total, each performing one of their favourite songs, providing the perfect ‘entree’ for the main course. They were: Lynda & Tom Degney, Richard Ruthin, Mike Hastings, Glyn Hudson, Joe Lyon, Neil Martin, Penni Neale, Mike Whitaker, Chris Birchall and Richard & Wendy Eastwood.

Just Singing in the Rain ♫♪ On Yer Bike