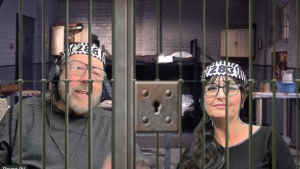 Having had a nostalgic visit to The (virtual) Feathers, the previous week, we were virtually arrested for virtually breaking and entering, so this Thursday we ended up broadcasting from Ruthin Gaol!

It wasn’t all bad; we had three square meals (well, three square slices of dry bread actually), but best of all we were treated to some great music from all you lovely Ruthin AllStylers who’d obtained visiting orders to come and entertain us.

Rosie and Meri, from Bwlchgwyn, got things underway with a medley of lively tunes on fiddle and guitar, followed closely by Adi Nixon, Robin the Busker, Carol Roberts and a whole string of others, far too many to mention.

Previously a frequent visitor to our real club nights, Mike Whittaker made his first ‘virtual’ appearance, as did Sam Moorcroft, formerly of the band Clwydian Rangers. Mike sang one of his own songs “Love is Everything” and Sam served up a tasty helping of Damian Rice.

Doug Pemberton was someone else we used to see at The Feathers albeit in the audience, never in front of the mic. Tonight though, he rectified that situation with the Warren Zevon song, appropriately titled for these strange times, “Don’t Let Us Get Sick”.

And whilst we’ve had the pleasure of Gill and Ian’s company for the past few weeks, it was great to see a remotely recorded collaboration that included the other members of the Jabberwocky band, Mick and Gilly.

One of the club’s longest-standing members Tom Degney was his usual busy self, accompanying wife Lynda and fellow band member Richard (who, incidentally, has also earned his long-service award). And the third member of the Tom, Dick and Harry band, Harry himself, gave us a lovely rendition of “Sporting Life Blues”. 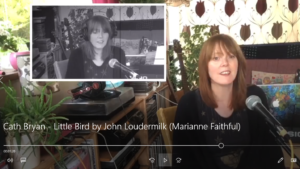 It seems unfair not to mention everybody who but as the playlist above testifies, there were thirty-nine fabulous songs from no fewer than forty-nine performers counting the duos and distancing collaborators. And amongst those gems, it has to be said that John D Loudermilk’s “Little Bird”, sung a Cappella by Cath Bryan, was a joy to behold.

With their weekly saga, “Lockdown with the Eastwoods, “Wendy and Richard have been going above and beyond in the entertainment stakes. In this episode, Wendy discovered the “hidden camera” with hilarious consequences, prompting the song “Welcome to My World”. 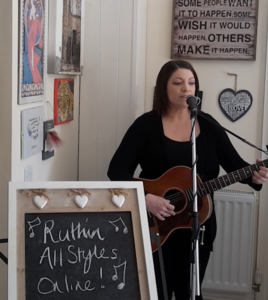 Wendy, of course, was one of the first to introduce us to the beautiful songs of Edwina Hayes and our regulars will remember that lovely evening, a couple of years ago when we had Edwina perform an intimate concert for us at The Feathers.

Imagine my delight, therefore, when the lovely lass from Yorkshire agreed to record a couple of songs, especially for our virtual music night.

And so, Edwina opened the second half of our evening with “Just Another Bend in the Road” and then in the finale spot, she treated us to “Tomorrow Is a Long Time”.

Last week we had a nostalgic visit to The (virtual) Feathers – and we were virtually arrested for virtually breaking and entering 🙂 . So this week we are broadcasting from Ruthin Gaol. ► As always, wind to 5 minutes in, for the start of the show.