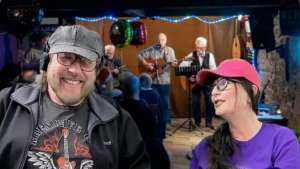 Yes, nine weeks into this infernal lock-down, we decided we were entitled to start feeling homesick for what has been our club’s beloved home for the last five years, so our setting this week was back at The Feathers.

Luckily, we have no shortage of photographs and video footage, and we were even able to take everyone on a sentimental journey from the pub’s front door, through the main bar (with a wave and a smile from the lovely Zakhia), down the passage and into the function room – complete with ambient chatter and sounds of musicians tuning-up, taken from recordings of previous gatherings. 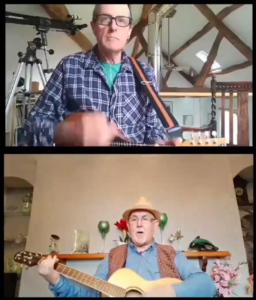 And to add to the authenticity, almost all of the regulars ‘turned up’, including the Tom, Dick & Harry Band, and making his first online appearance since the lockdown, it was great to see and hear Harry Robertson, who treated us to one of his wonderful home-grown songs “Going Down Slow”.

Another first ‘virtual visitor’ was our good friend John Williams, who beamed-in from Birkenhead with his faithful cello mandolin to perform Jason Isbell’s “Traveling Alone”.

The number of online collaborations is growing apace too, as many of you are getting to grips with the technology. Tom Degney has got it all sussed out, as have Alan Thompson and his sister Linda. A new one this week was a duet from the two Robins who brought us “Wagon Wheel” from miles-apart in a video produced by Denbigh music photographer George Frost. 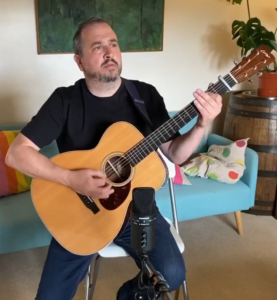 In the continuing hilarious saga of ‘Lockdown with the Eastwoods’ ,Wendy was doing her level best to socially-distance from Richard by locking him in the garden shed!

Starr Guest
The eagle-eyed amongst you will have noticed that we’d neglected to remove the entry on the website calendar for the night’s scheduled concert “Gary Edward Jones introduces David Starr”.  Well, we left it in place for a very good reason.

The Colorado-based musician was due to have played at the club as part of a UK tour but instead agreed to join us via the wonders of the interweb, enabling us to fulfil the promise.

So for the evening’s finale, we first had a song from Gary Edward Jones – not just any song but a brand new one, “Coming Back Around”, which was receiving its first public airing. Gary then introduced our ‘Starr turn’.

After delivering a lovely message from his home music room in Colorado, vowing to come see us in person next year, David sang us his lovely song “Beauty and Ruin” followed by a couple of tracks recorded at his local Arts Centre prior to the lock-down.

David was also due to play a fund-raising gig at The Tin Shed, in Treuddyn, on Sunday and I’m delighted to say he fulfilled that promise with a 90-minute live-streamed concert which raised donations of over £700 on the night for the local charity RENEW in aid of refugees stranded on the Greek island of Leros.

It was a lovely end to yet another wonderful three hours of music from our very own musical community in which every single one of you are the stars.

May 14th -The Nostalgia Show 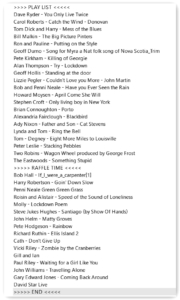 The Music is Stayin’ Alive Week 10 – The Lockdown Blues