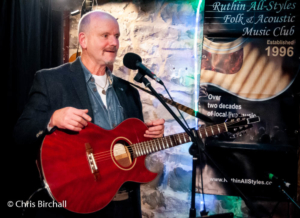 In fact, every single pair of eyes in the room were smiling, whilst those Irish eyes were twinkling as their owner’s beautifully crafted songs were interspersed with tales of his Irish upbringing and anecdotal yarns about his musical journey through life.

You will go a long way to find a more entertaining and engaging folk singer than Antony John Clarke. He has his own unique style of modern folk songs with words that conjure up pictures of life, painted with humour and a not insignificant touch of the old blarney. 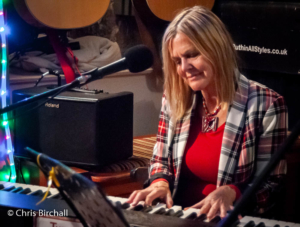 He was accompanied on piano by his lovely wife Julia, who also wore a beautiful smile throughout the evening despite bearing the brunt of many of his jokes. It was Julia’s 63rd birthday and Anthony John made much of the fact that it heralded the beginning of the annual eight-day period when he is technically a year younger than her.

The humour comes effortlessly, both within the songs and in the narrative between them. The whole of his performance is full of fun with lively and uplifting songs such as “The Cockerel Has Done a Runner”, “We Pulled Through”, “I Hate Camping” and “They Don’t Write Them Like That Any More”.

As with his 2017 concert, Anthony John and Julia stayed over in The Feathers’ comfortable accommodation which once again resulted in him overrunning our usual finish time by almost an hour. Not that anybody objected. 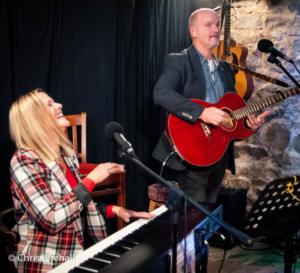 Floor Singers
The room was comfortably full and as always, both halves of the evening had begun with a round of songs from the floor, on this occasion courtesy of regular members Lynda and Tom Degney, Robin the Busker, Richard Eastwood, Joe Lyon, Chris Birchall, Glyn Hudson, Richard Ruthin and Penni Neale. We also welcomed a first-time visitor from Eastbourne, folk singer Nick Cant, who happened upon our lovely club whilst holidaying in the area.

I think it’s true to say he couldn’t have picked a better evening to do so.

A Baker’s Dozen Another late finish