12 Singers and a Gremlin 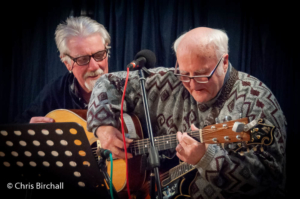 The last time I saw anything the like of it, was at a Quo concert when Parfitt and Rossi both proceeded to play the same guitar at the same time. Tonight, however, it wasn’t showmanship, Richard had forgotten the intro to their song (happens to all of us) so Tom snuck up behind him with a hands-on reminder, much to the amusement of our thirty-strong audience.

The multi-instrumentalist that he is, Tom is usually restricted to three different instruments: two that he and Lynda bring and a borrowed guitar. Tonight it was the dobro and the mandolin but I could see his eyes light up as Steve Bailey produced a recently-purchased blue ukulele.

Steve, who usually sings a cappella, acquitted himself admirably, playing it in public for the first time ever, whilst singing “New York Girls”.

Gremlins
The temptation proved too much for Tom however, who later borrowed the little blue uke for a performance of “Ain’t She Sweet” but not before an unwelcome ‘gremlin,’ in the form of a power surge, rudely interrupted Tom by flickering the lights and putting one of our speakers into an uncontrollable howling feedback loop.

It took highly skilled technical know-how to fix it. Yes, that old “switch it off and back on again” trick saved the day 🙂

Alan Thompson pulled two new covers out of the bag, in the form of Pink Floyd’s iconic “Wish You Were Here” and Bob Marley’s “Redemption Song”.

Glyn Hudson gave us Christy Moore’s “Nancy Spain”, Lynda Degney took us up “Fool’s Hill”, Joe Lyon sang about “Colours” and I told the tale of a “Horse With No Name”. 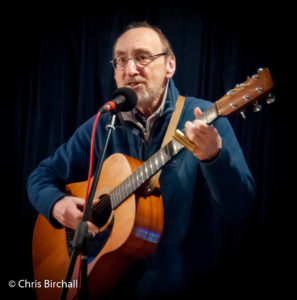 For his second spot, Richard Davies recruited Enid Toft to duet with him on the lovely Welsh classic “Myfanwy”, with the ever-present Tom on mandolin.

Both halves of the evening had been opened by Raphael Callaghan (left) with some fine blues numbers including his self-penned “Living Blues” and “Too Much Rain”.

Finale Time
Earlier in the evening, Penni Neale had reminded us, Gershwin style, that it would soon be “Summertime”. And now, for the finale, she treated us to “Can’t Remember If We Said Goodbye” and for an encore, a lovely version of Led Zeppelin’s  “Stairway To Heaven”. 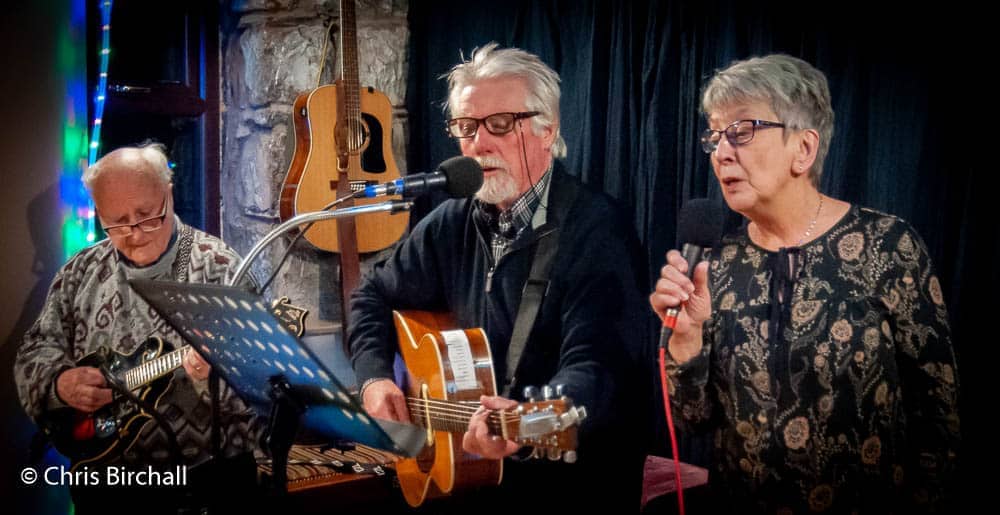 A Perfect Ten Time for Chocolate, Music and Bandits