And what a busy night it was, with no fewer than fifteen singers presenting a broad body of music, with something to suit everyone’s taste.

Some musicians were busier than others, being called upon to take part in various impromptu collaborations. Tom Degney, of course, was as always ready and willing with mandolin and dobro, and John Helm was kept busy with his bass guitar.

John provided the bass line for Peter Hodgeson on Van Morrison’s “Have I Told You Lately” followed by Neil Young’s “Heart of Gold”. Swapping the bass for his bouzouki, John also chose a Van Morrison classic for his own set, roping in Richard Davies to join him on guitar for “Star of the County Down”. Then he was back with his bass to return the favour for Richard, who sang “You Never Can Tell”.

Pete delivered a reworked Gilbert and Sullivan song “I Have Seen You Often”, with new lyrics written by himself, from the production of “Dame Agatha’s Greatest Case” in which they are appearing at Denbigh’s Theatr Twm or Nant on the 28th to 30th of this month.

Lynda Degney gave us two Gibson Brothers songs, “Remember Who You Are” and “Fools Hill”. Then husband Tom chose the Grateful Dead’s “Midnight Moonlight”, before transporting us back in time with Dame Gracie Fields’ signature tune, “Sally”.

Liverpudlian, Joe Lyon got all nostalgic with Gerry Marsden’s “My Home Town”, followed by Joe Brown’s “I’ll See You in my Dreams”.

I doffed my cap to Paul Simon with “Something so Right” and “Slip Sliding Away”, and Jeff Jones saluted Bob Dylan by singing “Make You Feel My Love”.

Andrew Bowsher was also in a Dylan mood with a fine rendition of “Mr Tambourine Man”.

Well I “Wasn’t Expecting That” but that’s exactly what we got as Keith Hawley performed the Jamie Lawson song of that very name, followed by a rather tasty version of the Beatles classic, “Here Comes the Sun” (click ► below to listen). 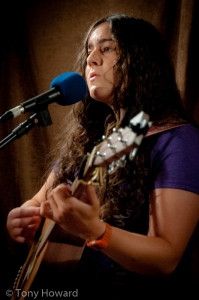 Robin the Busker put an impromptu band together with the aforementioned Tom and John, to give us “Skin” by Rag’n’Bone Man.

Then as it was approaching bedtime, it was Penni Neale who took us, metaphorically and melodically, up the “Stairway to Heaven”.

And finally, we were delighted that Carmarthenshire songstress Tara Crank (pictured right) had paid us a second visit. With a voice so reminiscent of the great Canadian folk singer, Tara gave us Joni Mitchell’s “Big Yellow Taxi”. She then brought what had been a fabulous evening’s entertainment to a close with the beautiful Sandy Denny song “Who Knows Where the Time Goes”.