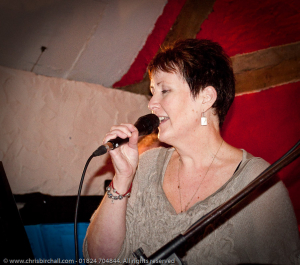 It was standing room only at the Cross Keys this week.

Rocking Robin kicked the evening off in his usual rousing style.  Stephen took the role of MC for the evening and was kept busy introducing not only a long list of “usual suspects” but some visitors and new faces too.

Adding variety to the entertainment was stand-up comedienne Vicky Latham from Denbigh, who popped in to give us a five minute spot, en route to a gig further down the Vale.  Geoff Hollis from Rhyl made a welcome return as did Enid.

First timers at the club were Ian, Jill and Steve, collectively known as the Phyllis Doris trio from Caerwys. The band explained that they took that name in memory of the actress Myfanwy Talog Williams, who was born in the village.  Myfanwy, who died in 1995, famously played the character of Phyllis Doris, the teenage daughter of the family in the BBC Wales sitcom Ryan and Ronnie.  (She was perhaps best known to most people as the long-term partner of David Jason).

The trio brought the night to a close with a great set, sharing the finale slot with our own Tom, Dick and Harry plus John.  During the set, Richard gave us an impressive display of dexterity by continuing to sing and play guitar whilst doing the limbo under a collapsing mic stand!