Well it certainly feels that way in my house, we have so many family and friends birthdays during this, the ninth month. What is it about the run up to Christmas? Wouldn’t you think everybody would have been too busy to be frisky!

Anyway, two of said birthdays also occurred in the Ruthin AllStyles stable. Songbird Wendy Eastwood and regular audience member Gwynn Jones. I’m far too much of a gentleman to give a lady’s age away. Suffice to say they clocked up 120 years between them …and the candles were evenly distributed 😉

As we all scoffed cake during the break, birthday boy Gwynn also won the wine in the raffle. But the icing on the cake (and which goes to reinforce my earlier observation) was that Gwynn became a granddad in the early hours of the following morning.

Penni Neale got the proceedings underway, giving her new toy its first public airing. There was nothing to see but plenty to hear courtesy of the unique Tonewood Amp strapped to the back of her guitar. Willie Nelson’s “Till I Gain Control Again” had the honour of being the first song it delivered.

A tale of the legendary “Carmarthen Oak” and the associated floods was Richard Ruthin’s first offering with additional mandolin accompany from Tom Degney. Tom stayed stage-side to accompany Lynda on “Plant Your Fields” and other bluegrass delights, before flying solo on his ukulele to play “The Third Man”.

I was in a Beatles kind of mood and my guitar was ‘gently weeping’. 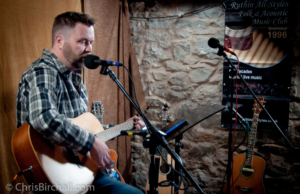 Pete Kirkham (left) gave us Glen Hansard’s “Falling Slowly” with Cath on guitar, after which he took charge of it for the first time at the club (he’s been quietly learning to play, the dark horse) and the song he chose was the Nine Inch Nails song “Hurt”.

Richard Eastwood doffed his cap to Don Williams with “We Should be Together”, and Wendy went all Swedish in an ABBA kind of way.

Cath Bryan sang a jewel of a song called “Hands” and Andrew Bowsher picked out some fine instrumentals on his parlour acoustic. 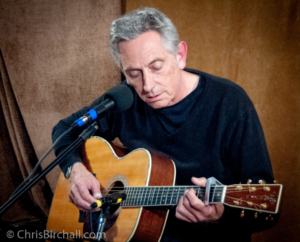 One of our newest ‘regulars’ is Denbigh’s Alan Thompson and in addition to some Ryan Adams goodies, he sang Stephen Stills’ “Four and Twenty”.

We always welcome new faces to the club, especially because they often become regulars. This week it was Lester Parrott, who hails from Llangollen. “Black Jack”, and Bob Dylan’s “I’ve Got the Worried Blues” where amongst his excellent songs.

The finale came before we knew it.  We had already heard The Carpenters’ “Only Just Begun” and a beautiful rendition of two lovely French love songs from Mike and Rosa (pictured below). The earworm they sent us home with tonight was the rhythmic classic, “Carnival”. (Click below to listen)

Next week: A Singers’ Night hosted by the Degneys and the Eastwoods.