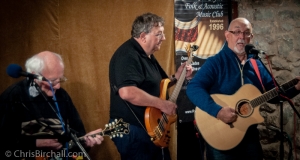 Yes it was Robin the Busker who kicked off the evening with some rousing songs from his busking repertoire, accompanied  by John Helm on bass guitar.

It was one of his rare summer appearances at the club, in between sorties on the canals and waterways, where he hops from festival to festival, stopping off to “Busk for Cancer Research” at every opportunity along the way.

It was good to see Lynda and Tom Degney back after a two week absence following Tom’s short spell in the “Costa del Glan Clwyd”. They were singing the praises of the NHS, along with their usual mix of Country and Americana. 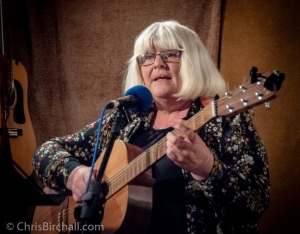 Harry Miller was back too, after being in the company of doctors and nurses. Whatever else he might have had removed, it certainly wasn’t his sense of comedy as he was on fine form with his humorous tales.

Bob Dylan was foremost in Keith Hawley’s mind as he opened his set with “Things have Changed”, following up with a David Grey number. I kept the Dylan theme going with “Blowing in the Wind”, and our very own ‘Bruvver’, Joe Lyon, took a look at the world through Joe Brown’s eyes with “A Picture of You”.

Bob Hall was biased toward Joan Baez as he sang “There But For Fortune”, Steve Bailey took us down the traditional folk road with “North Country Maid”, and Penni Neale brought us back to present times with a lovely version of Christina Aguilera’s “Say Something”. 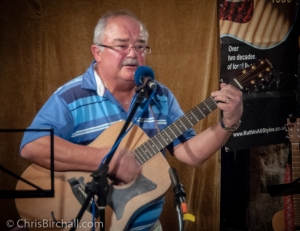 Country music was very much to the fore in Richard Davies’s set as he sang “Old Flames”, with Tom Degney on mandolin and John Helm on bass.

This week’s long distance award went to Terry Davies. Once a resident of the Vale of Clwyd, where as a youngster he’d played in a band, Terry has spent the last forty years or so in Canada, and was over here for a holiday.

We found him a guitar and he treated us to “Four Strong Winds”.

For our finale this week we called upon Peter Hodgson, who was making his second visit to our club. Peter enlisted the help of  tonight’s very busy bassist John Helm, and included two Tom Petty Songs in his sets, “Learning to Fly” and “Into the Great Wide Open”, as well as the Chris Stapleton song “Broken Halos”. But it was the James Taylor classic, “Carolina in my Mind”, that he chose for the last song of the evening, with backing harmonies courtesy of Penni Neale.