A Coalition of Merry Music Makers

With music foremost in our minds, we congregated at The Feathers, fresh from the polling booths, confident that all that nonsense was behind us for another five .   😯

Oh dear! It seems instead, that we’ve been and gone and hung parliament out to dry …and it looks like rain!

Ah well. Never mind all that. Calling “Order, order”, we formed a coalition of merry music makers, with no-one particularly bothered about whether they sang into the red microphone or the blue.

The Front Benchers
It was Wendy & Richard Eastwood who got the evening off to a fine start with some beautiful harmonies, as they sang “Crying Time” and “Devoted To You”.

Tom and Lynda Degney were “Somewhere on the Road Tonight” and ended up on “The Northern Plains”.

Richard Davies ventured into Dylan territory and when it was “All Over Now Baby Blue” he became a bit of a Maverick, singing the 1995 hit by the band of that name, “All You Ever Do is Bring Me Down”.

I doffed my hat to Glen Hansard and Van Morrison.

Moving on, Joe Lyon gave us some sixties soul with Stevie Wonder’s “Place in the Sun” before consolidating his sunny disposition by “Lazing on a Sunny Afternoon”.

Next up were three first time visitors to Ruthin AllStyles.

Musicians Gary, Haden and Dave don’t have a stage name, despite having performed together for some time at venues along the North Wales Coast. I’m useless at remembering names, and my attempts at introducing them ended up sounding something akin to ‘Dave Dee, Dozy, Beaky, Mick and Titch’, so we settled on Geoff Rowlands’ suggestion of ‘GHD’.

Anyhow, curling tongs and hair straighteners aside, what this energetic trio gave us was a fine mixture of reggae and rock, kicking off with the Jamaican flavoured “Al Capone” by Prince Buster. 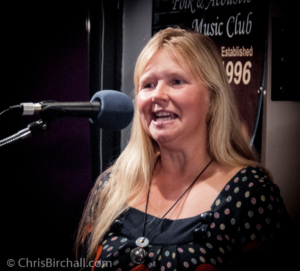 During the second half we all managed to fit in at least another two songs each, with some of our duos breaking free to fly solo. Tom Degney sang “Catfish John”, Richard Eastwood gave us a Jim Reeves, and Wendy followed with “Jolene”.

Jez McCann hadn’t reckoned on doing a floor spot, but we weren’t going to let her get away with that! Accompanying herself on a borrowed guitar, she sang Blind Blake’s “Police Dog Blues” and the beautiful All About Eve song, “Martha’s Harbour”.

Jez had come to The Feathers to bid ‘bon voyage’ to our friend Andrea who was heading back to Portugal.

Andrea responded by taking us up to finale time with a rousing a capella rendition of “Calon Lán”, joined in the chorus by every voice in the room. 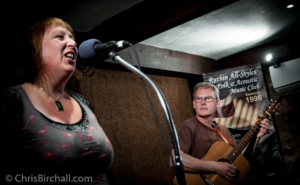 Finale Time
Earlier in the evening, Pete & Di had performed one of their own songs, written about All Souls Night. 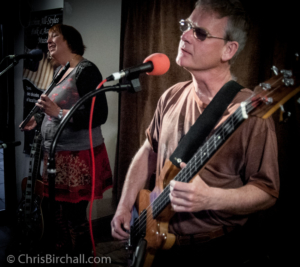 They also give us the New Seekers, Yazzo, and a fabulous instrumental straight out of the casbah, with a measure of Eastern Promise that almost got everybody belly dancing, before sending us all home with our feet twitching to a lively Irish Jig.

A Pinch and a Punch Tom, Dick & Harry