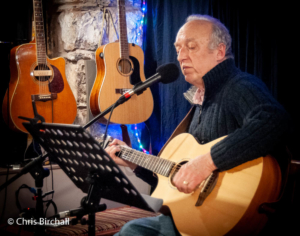 Wow, what a wonderful start to the New Year, as the club enters its twenty-fourth year and its sixth at our current venue.

No fewer than sixteen performers braved the damp and dismal weather and with more than double that number in attendance, the room was comfortably full, making for a great atmosphere in the back room of The Feathers. 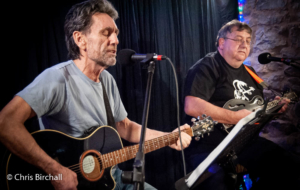 Welcome Return
It was good to welcome back Pete Hodgson and John Helm (left), performing as a duo with Pete on guitar and John on mandolin.

After the break, we had a rare appearance from someone we really don’t see as often as we’d like – the inimitable John Sellers (below). John followed up a cover of Bruce Springsteen “Western Stars” with a great song that he had written about the Kings Arms in Denbigh. 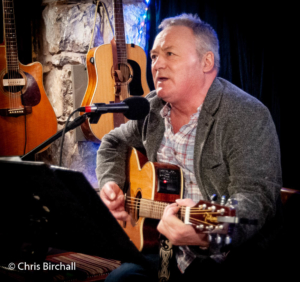 We had songs from Cath Bryan and from Pete Kirkham who gave a rather splendid version of the 1930s Hoagy Carmichael classic, “Georgia on My Mind”, made famous, of course, by Ray Charles.

Robin ‘the Busker’ Wynne Jones enlisted his namesake Robin Spreckley and Tom Degney for some old favourites including “Copperhead Road”.

A New Face
Steve Juckes-Hughes has become a regular at the club over the past year and after his spot, he introduced his daughter Catryn, whose beautiful voice captivated everyone in the room. Her rendition of “Fields of Gold” was quite spellbinding. (Click ► below to listen) 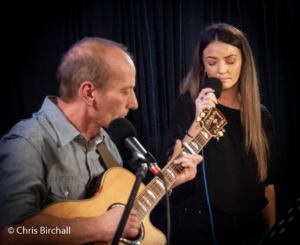 One Man Band
Brian Peters was the last of our super sixteen to perform and he treated us to some splendid blues numbers, juggling guitar, harmonica, kazoo, beatbox and a foot tambourine.

Our ‘Random Name Generator’ selected four of the night’s performers to fill the final 20 minutes of the evening. The last of these was the ‘one-man-band’ that is Brian and the earworm he sent us home with was the 1954 American folk song “San Francisco Bay Blues”.