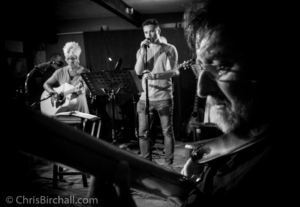 Mary Lou wasn’t there of course – but just about everybody else was!

Every time I went back to my station, Jayne had added yet another performer to the list. They just kept on coming. Twenty-one performers in all and almost double that number in the room, all enjoying a fine and varied programme. Sorting out the running order had me running around in circles – but in a good way.

Richard was joined on stage by the rest of the Tom, Dick and Harry band for the first set, although John Bass plugged in a long cable and played from his seat in the front row, due to the fact half the stage area was taken up by a fabulous looking – and sounding – electric piano the size of a baby grand, which Em would be playing later in the evening. 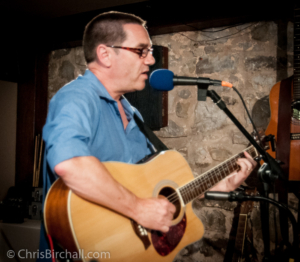 Richard and Harry’s set of two songs each, included “Memphis in the Meantime”, “Shilo”, and “Dimming of the Day”, after which Tom remained on stage, swapping his mandolin for a guitar to accompany Lynda on “That Bluegrass Music”.

The music continued with Mark Thatcher singing “Ricky Don’t Lose That Number” (good to see Mark back at the club) and John Ryder with “Sweet Lorraine” and the 1944 classic, “Twilight Time”.

Next up was Ron, an old school friend of Harry’s who was over from Nottingham for a visit. Ron played a fabulous set with some fine guitar work. 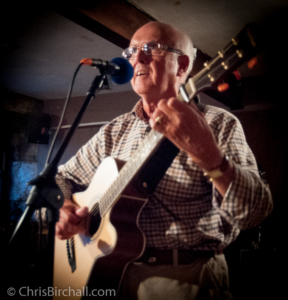 Because we had problem with the sound on his first number we persuaded him to do a third. And then toward the end of the evening we brought him back up for a fourth on account of the fact he’d won the night’s ‘Long Distance Award’ (we like to get a good miles-per-song ratio 🙂 )  He Sang “How Long”.  Let’s hope it’s not too long before his next visit.

The last act before the beer break was ‘Dave and the Young Ones’.  Well Dave was definitely Dave, but the ‘Young Ones’ were cunningly disguised and bore an uncanny resemblance to Emyr Morris on keys, Harry Robertson and Llinos Finnie on guitars, and John Rowell on Bass and drum machine. Llinos’s son Dave had enlisted this fine bunch of musicians to be his backing band for the forthcoming weekend’s ‘Hiraethog Beer Festival’ where they were booked to appear at the Glan Llyn in Cyffylliog.

I have a sneaky feeling that our club night was a dress rehearsal for their big event, but we’d like it to go down on record that this was in fact first ever gig, here at The Feathers. Their set, which included one of Dave’s own songs, was warmly received by all in the room. 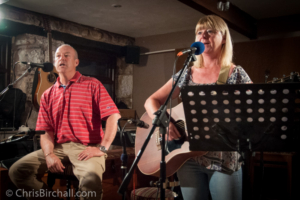 And how good was it to have Em back, tickling the ivories? Let’s hope we see more of him in future weeks.

After winning the bottle of wine in the raffle, Richard Eastwood treated us to some Jim Reeves, accompanied by his good wife Wendy who then went on to sing a sweet medley culminating in “Strong Enough to Cry”.

Jim continued the Scottish theme with a medley of Scott Skinner tunes on his electric fiddle. Bob Neale went all Woody Guthrie on us and Glyn had everyone joining in with “At the Dawning of the Day”.

“More Than Words Can Say” and “Ruby Tuesday” were Enid and Neil’s contribution to our groovy Thursday, Next was Penni Neale who sang a lovely Welsh ballad followed by “The Nearness of You”.

And for the finale spot, it was over to Dave Finnie and The Young Ones who sang “Budapest” and “The Letter”. There was an encore, of course, and it came in the form of Sinatra’s 1931 jazz standard (written by Gerald Marks and Seymour Simons) “Why not Take All of Me”. It was a fine earworm with which to send us on our way.

Footnote:
It was great to see Llinos and Campbell Finnie back at the club. When they started what was then the Ruthin Folk Club in this very same room back in 1996, I wonder if they ever imagined their three year old toddler, Dave would be headlining there twenty years later!

Check out our history page.