A Great Start to the New Year

Sixteen singers sought to secure a super start to 2019.

And with a total attendance of almost double that number, the room provided a warm and welcoming atmosphere for our first Singers’ Night of the year.

In fact, it was a lively atmosphere all round as the big screens in the far bar were showing the Liverpool vs Manchester City match. Our resident football aficionado Joe Lyon kept an eye on the scoreline for us and, being a staunch Evertonian, delighted in reporting that City was one up against Liverpool FC as he came to the mic for his floor spot. He had intended singing the Manchester team’s signature tune “Blue Moon” but Cath Bryan had already sung “Once in a very Blue Moon” and Richard Ruthin’s set had included “Blue Moon Turns to Gold”. Joe concluded that those two song titles summed up the situation nicely and so treated us to a couple of rather tasty John Denver numbers instead. 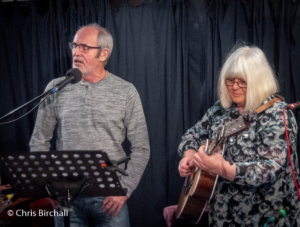 English Folk, Americana and Welsh Arias
We had some Welsh a cappella from Rhodri Hampson Jones, some tuneful folkiness from Glyn Hudson and a helping of Americana from Tom and Lynda Degney.

Tom’s mandolin and dobro skills were very much in demand during the evening. Amongst others, he had accompanied Penni Neale on “The Green Green Grass of Home” and the beautiful ballad “Hickory Wind”, but not before she, in turn, had provided guitar accompaniment for Bob Hall on “You’ll Never be the Sun” (right). 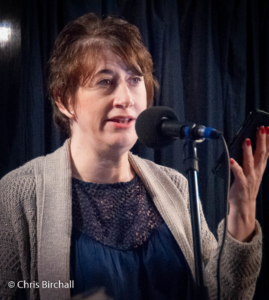 I dished out some Lennon and some Dylan, then Geoff Durno went all Donovan on us with that legendary Scottish songwriter’s lovely ballad “Colours”.

Wendy and Richard Eastwood got all loved-up, she singing “Only Want to be With You” and he replying with “Can’t Stop Loving You”.

New Faces
The night also played host to two new faces at The Feathers. Rachael Stanley (left) gave us a lovely a cappella version of the Joan Baez song “Lady Mary”, and Victor Pennington accompanied himself on guitar for two folk songs from his Brazilian homeland in the country’s native Portuguese language. We hope these will both come and see us again soon. 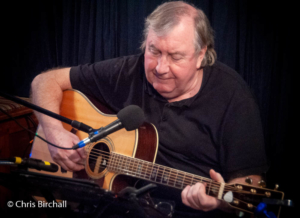 Having earlier treated us to the Don McLean song “And I Love You So” and Paul Simon’s “Duncan”, Neil chose is own beautiful composition “Nothing Stays The Same” to bring what had been a fabulous evening of music to a close. (Click the ► below to hear it)

Nothing Stays The Same – Neil Martin