A Happy and Harmonious New Year

As we prepare to say goodbye to 2017, we look back at some of its highlights, and forward to what the coming year will bring… 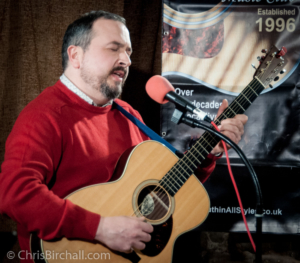 Performing a floor spot during last week’s Christmas Knees-up, Gary Edward Jones gave us a taste of what we can expect from his intimate concert at The Feathers in January.

He will be singing songs earmarked for his second album, some favourites from his first, The Cabinet Maker, and a selection of Paul Simon songs from his forthcoming 2018 nation-wide tour entitled ‘Something About Simon’. Click on this soundbite and listen whilst you read the rest of the page. 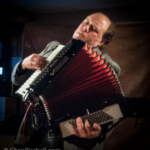 Following the Gary Edward Jones concert on January 25th, we have a host of fine artists lined up to perform over the next six months.

On March 8th, the highly entertaining multi-instrumentalist Jon Brindley will be returning to perform a mixture of covers and original material in his own inimitable style. 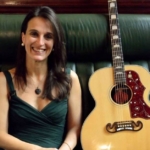 We are thrilled and delighted to be welcoming Flossie Malavialle to Ruthin AllStyles on April 19th.

Engagingly entertaining, this lovely French singer brings a smile with fascinating tales of how and why she came to leave the warm climes of Languedoc-Roussillon in southern France to live on the southern slopes of Newcastle upon Tyne. Her Geordie/French accent is a joy to behold.

And then on June 7th, Jimmy Rae and the Moonshine Girls will be spreading some country, rocky stardust at The Feathers. Remember when Jimmy and Sarah played “Eddies Guitar” and “Summertime Blues” during a floor spot last May…

And to round off the first half of 2018, we are pleased to welcome Raphael Callaghan who will perform a Showcase Spot for us on July 5th.

Full details and ticketing information is available on our What’s On page.

That Was The Year That Was 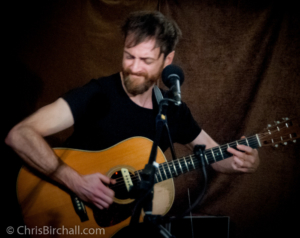 2017 started of with the wonderful finger-style magic from the guitar wizard Jim Bazley.

In February, Wendy Eastwood teamed up with pianist Andy Murtagh to perform a showcase set as the duo Almost Blue. It is well known that one of Wendy’s folk heroes is Edwina Hayes, and in April the sweet lass from Yorkshire came over to perform an intimate concert at the club.

The merry month of May saw Merry Hell’s female vocalist Virginia Kettle, perform both solo and with the accompaniment of a few of her band members. And it wasn’t the first time this lovely singer song-writer from Chester had performed for us in her own right, for way back before her time with Merry Hell, the then Virginia Barrett played a support spot during the club’s early days at The White Horse. 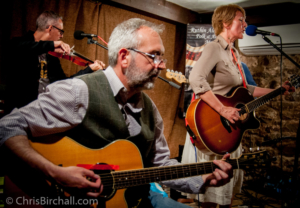 July saw another Showcase, this time by Rhyl’s Kevin Wardman, followed in October with a concert by the honey-voiced Irishman, Anthony John Clarke.

Our last gig of the year saw Virginia return with her husband John and the rest of the Kettle brothers for a concert by the six-piece incarnation of folk-rock legends Merry Hell. Playing to a capacity audience, they did what Merry Hell do best and knocked our folkin’ socks off! 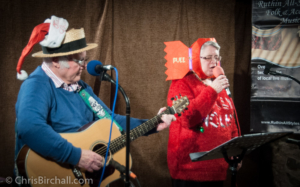 In addition to the concerts and showcase sets, we enjoy fabulous music every single Thursday of the year of course (bar Christmas), when a multitude of talented musicians turn up week after week to perform floor spots.

We have our solid core of regulars as well as those who visit on an occasional basis, making for an interesting and varied program, as we never know until last minute, who might turn up on the night. And it’s surprising how many times we find ourselves welcoming new faces to the club.

The Long-Distance Award goes to our Aussie friend Karen White, or the “Quintessential Quirk”, as she is known in Queensland. Karen makes an annual folk pilgrimage to the UK and always makes at least one appearance at The Feathers. 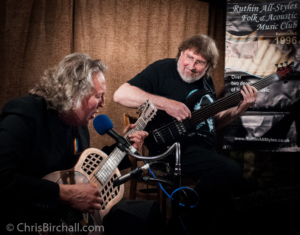 It would be impossible to mention all of our wonderful members and visitors here, but I would like to say how much I enjoy seeing the many collaborations that ‘just happen’ and some of the bands that are formed by members.

The Tom, Dick and Harry Band is well known to us of course. Their bassist, John Rowell has also been keeping busy performing as a duo with Chester Weiss, as well as rekindling his musical association with the club’s founder Llinos Finnie, forming a new band “Breeze” along with Neil Wilkinson.

New to the club this year were Pete and Di, who later joined up with Dom to form “The Amazing Clouds”. Harri Owen and Oli Bradley-Hughes teamed up with young Tom Jones to form the “Clwydian Rangers”.

And it is always good to see Mick Watson make an occasional return to Ruthin AllStyles with pianist Ian, and their lovely wives Gilly and Gill, performing as the band Jabberwocky.