A Pinch and a Punch 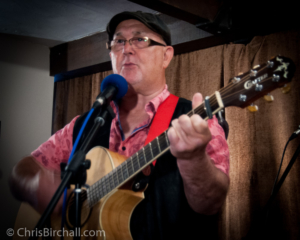 We should have expected that reciting ‘a pinch and a punch for the first of the month’ was just asking for trouble. Well, Robin the Busker turned up and that’s exactly what we got.

It was the kind of trouble we could cope with however, being the title track of folk singer Ray Lamontagne’s 2006 top five album “Trouble”. Robin followed this with Leonard Cohen’s “Marianne”, and told us tales of his experiences at last week’s Audlem festival.

Next up was the Tom, Dick & Harry band featuring, as always, John Rowell on Bass. Harry Robertson took the lead vocals on “Mess of the Blues” before Richard Ruthin jumped in at the “Speed of the Sound of Loneliness”. 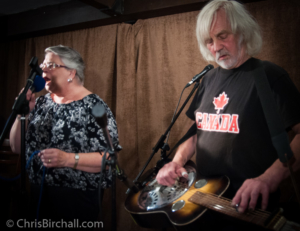 Armed with his dobro, he also joined fellow band member Tom Degney as they accompanied Lynda on Christy Moore’s “Ride on”.

Tom then took us along “The Road to Dent” (a tune he wrote on the mandolin whilst visiting Dent village in the Yorkshire Dales) in honour of two ladies in tonight’s audience who were visiting from that area. 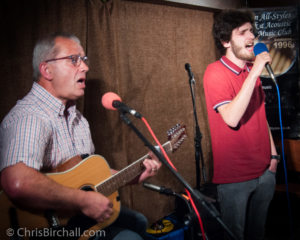 Young Harri belted out Bob Dylan’s “Knockin on Heaven’s Door” before being joined on guitar by his dad, Bob Owen, to slow things down with the Welsh ballad “Strydoedd Aberstalwm”, written by Bryn Fon.

Joe Lyon shadowed Sir Cliff’s 1963 hit “In a Matter of Moments” and moments later went all Kinks on us with “Sunny Afternoon”.

I wheeled out the U2 song “Still Haven’t Found”, and “Hold On” by Tom Waites. Richard Eastwood sang “He’ll Have To Go” by Jim Reeves and the Johnny Cash classic “Folsom Prison”. 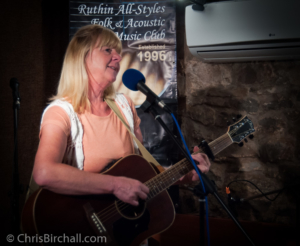 Wendy Eastwood’s set included The Shires song, “Daddy’s Little Girl” and a beautiful version of James Blunt’s sad lament “Carry you Home”, changing the words of one of the verses to honour those who lost their lives in last week’s Manchester bombing.

Tom, Dick & Harry had given us a “Mess of the Blues” earlier in the evening, and for the finale, Harry reminded us about his “Old Friend the Blues”.

But it was down to Richard to set every foot in the house tapping, taking us up to home time with “Tulsa Time”.

If you fancy seeing Richard and Wendy decked out in tuxedo and gold lamé, they can be found every Monday evening at St John’s Methodist Church, Llandudno, producing some rather delicious four-part harmony as part of the Harmony Singers. The thirty-strong group sing light classics, musicals and pop throughout the summer to raise money for local good causes.

And the Tom. Dick and Harry band can be seen in concert at Llanfair D.C. Church on Saturday July 17th, along with Fuchsia Jones and Pete n’ Di.

Singers’ Night 26th May A Coalition of Merry Music Makers