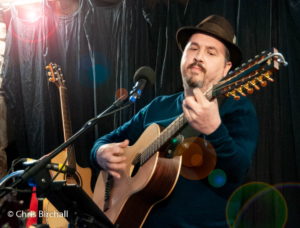 Gary Edward Jones has spent the past two or three years writing his “Something About Simon” stage show, practising the songs of Paul Simon and honing his finger-style guitar skills to equal those of the master. Jayne and I were privileged to have been present during his 2017 ‘tester’ concert and at the official launch of the “Something About Simon” concert tour at Liverpool’s Epstein Theatre last November.

During this time though, he was still writing and building up a collection of his own new songs in preparation for a second album sometime in the not too distant future. 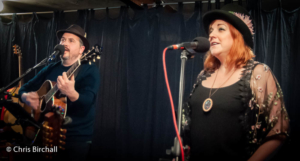 With the “Simon” Summer and Autumn tour dates rapidly filling up, Gary decided it would be nice to do a few early 2019 concerts showcasing his own material and we were delighted that he chose Ruthin AllStyles for one of the first. And as we suspected, it was a sell-out.

Opening his first set with a couple of new songs “I’m a Good Soul” and “Skin”, Gary followed up with “Free Falling To The End”, which is one of my personal favourites off his 2014 album, ‘The Cabinet Maker’.

Cycling between his Recording King Dreadnought, a custom Collings and a lovely parlour size twelve-string, we heard a fine mix of this brand new material including “Cheap Red Wine”, “Take Me Back”, and one that is so new it hasn’t even got a name yet. It was a beautiful tear-jerker of a ballad. 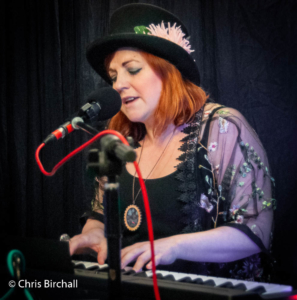 Gary’s wife Elizabeth was on hand for most of them, providing piano accompaniment and some lovely subtle vocal harmonies. But then, as a bonus, she treated us to a performance of one of her own latest songs, “Moth in the Wool”, written under the ‘Elfin Bow’ moniker, with Gary adding a rich bass line on a bass ukulele.

During the second half of the evening, Gary provided a little taste of his Paul Simon material with “The Boxer”, “America” and a cameo performance of “Still Crazy”.

Two more new songs, “She Moves Like the Summer Wind” and “King For a Day” were followed by a selection that we know and love from 2014, including “Mr Lonely Times” and “Bang Bang Bang”.

Then with about half an hour to go, Gary spotted a late arrival in the audience. It was Skeet Williams, who had toured with Gary in the past and featured on the Cabinet Maker album. 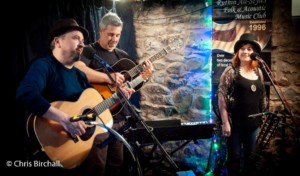 Skeet was dragged up onto the stage, protesting that he’d not played those songs for a few years. Apart from a few overheard quips of “What key is it in?” and “How does that go again?”, you would never have known. What followed was a testament to the camaraderie and musicianship of these guys as they tripped effortlessly through “Superheros”, “Real Life Paradise”, “Walk You Home” and the beautifully poignant “Oceans”.

Why is it that time always seems to fly when you are having fun. It was time to go – but not before they succumbed to the cries of ‘more’ by playing “All I Want is You” as an encore.

►For a special treat this summer, why not get your tickets booked for the “Something About Simon” show which is coming to Theatr Colwyn on the 5th of July.