A Thumbnail History of the Club

The club we now know as Ruthin AllStyles Music Club was founded on the 31st October 1996, at the town’s Feathers Inn and was initially known as The Feathers Folk Club.

It was the brainchild of Llinos and Campbell Finnie, two local musicians, who ran it for ten or more years. They not only provided the backbone of the organisation but were (and still are!) also brilliant performers.

Llinos, well-known hereabouts for her beautiful singing, has done some great work with a couple of musicians – John Rowell on bass and the late Bryn Roberts on guitar, collectively known as Mantra – in the area of modern folk music. Campbell has an excellent line in gentle contemplative folk music as well as a contrasting interest in humorous ballads.

Since those early days, the club has had a somewhat itinerant existence with numerous homes and changes of name.

Its initial tenure of “the back room” of The Feathers was short-lived. The room, back then, was damp and dark, so on January the 2nd it moved to the first of its three homes in 1997, the White Horse in Llanfair DC, and became known as Ruthin Folk Club.

Then in April, it moved up to the Glan Llyn in Clawddnewydd before returning to the town, to spend the last two months of the year at The Eagles on Clwyd Street.

On the 15th January 1998, the Castle Hotel on St Peter’s Square became its final resting place of the 20th Millenium.

After a little over three years, The Venue Night Club on Lon Parcwr became the… erm… venue during 2001 from April until September, when a change of management at The White Horse in Llanfair Dyffryn Clwyd heralded a return to this popular pub for almost ten happy years enabling the club to establish an identity and become well known and well-loved on the North Wales Folk Club Circuit.

During this time, and to reflect the need to broaden the club’s appeal, its name was changed to The Ruthin Acoustic Club and on the 10th February 2008, John and Cathy Rowell took over the running of the club for the ensuing two years until the pressure of work forced them to take more of a back seat.

John remained a very valued musician at the club, regularly appearing with the band Raven, and as bassist for the Tom, Dick and Harry combo, as well as in his own right. And always had an unstinting willingness to support other performers, whenever called upon, on his six-string bass guitar.

The new name, Ruthin AllStyles Music Club was chosen to reflect the fact the club has always appealed to very diverse tastes in both music and indeed poetry. This means that in each session there is music that will appeal to everyone’s tastes.

At Christmas 2009 it was John and Ros Ryder who took the reins. and at the start of 2010, brought the club back into the town itself, spending another few months at the Castle Hotel. Then followed a move to a new and what was hoped to be a more permanent home at the Wynnstay Arms.  This was a superb set-up as they gave over the entire restaurant area to the club on Thursday evenings as well as the adjoining lounge area.  Sadly this was short-lived and the sudden closure of the business forced us to go “house hunting” once again!

We sought refuge for three weeks at the graciously accommodating Woodlands Hall Country Club, near Bontuchel, whilst searching for a new venue back in the town itself.

The 21st of July 2011 was our first night at Ye Olde Cross Keys Inn. Whilst not as big as we’d been used to at the Wynnstay, it had a lovely welcoming atmosphere with fabulous acoustics. The rustic upstairs room in this quaint 500-year-old inn, with its original exposed beams and vaulted ceiling, was our home for three and a half very happy years.

During our time at the Cross Keys, John and Ros handed over the running of the club to Joe Lyon assisted by Chris Birchall who looks after the club’s website and Facebook page.

December 2014 brought the news that the Cross Keys was up for sale and that it might not even continue being a pub. This uncertainty led us to begin the quest for a new meeting place.

The newly refurbished Feathers Inn had indicated that their function room would be available, so we took up the offer and returned once again to this town centre venue. At the same time, Joe decided to step down and handed over the tiller to Chris and Jayne Birchall.

It has to be said, however, that Joe very much remains a key figure in the running of the club, taking an active role in the preparation of the room each week and generally assisting in the smooth running of club nights.

The new owners at The Feathers were extremely accommodating, building us a lockable chest to store our equipment and giving over storeroom space for us to keep rarely used lighting stands and other sundries.  This new venue very quickly gained favour with members and visitors alike and because of its intimate atmosphere, was often referred to as Ruthin’s answer to The Cavern!

During the first few weeks of 2020, news began to trickle through about a virus first seen in China that might be spreading to Europe. Numbers attending club nights began to dwindle and on Friday the 13th of March 2020, the decision was made to suspend our club meetings “for a couple of weeks”.  (see Not To Be Sneezed At)

Little did we know that those “couple of weeks” would eventually become seventeen months! 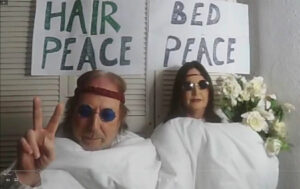 Having watched our lovely club grow in popularity during five fabulous years at The Feathers, Jayne and Chris declared that “no pesky virus was going to stop us now” and on March 19th 2020, they presented a “Virtual Singers’ Night” live-streamed from their Garden Room on Facebook, playing videos sent in by members.

The evening was a great success and sensing the enthusiasm among the members, Jayne and Chris sourced some broadcast software that would enable a slicker presentation. So the next week, on the 52nd anniversary of John and Yoko’s “Bed-in for Peace” they dressed up as the celebrity couple and presented the show from their bed!

The Thursday night live stream became the highlight of the week for many club members.  Between 50 and 120 people were tuning in on the night and by the weekend, each show would clock up over 500 views. Most importantly, the comments thread enabled members of our musical community to keep in touch during the darkest days of the lockdown.

The “couple of weeks” eventually became sixty-five and by the time the last show aired on the 24th of June 2021 no fewer than 2,643 videos had been submitted by our loyal and enthusiastic members, as well as by many new followers picked up along the way.

We had already been informed that our room at The Feathers was now earmarked to become a restaurant, so as the vaccination program progressed and government restrictions began to ease, it was time to look for a new venue…

July 2021 – Welcome to The Roundhouse 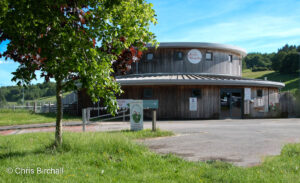 We were pleased to discover that this quirky circular community centre was available on Thursday nights and that a new cafe/bar had just been added. It was perfect for the immediate post lockdown period as it was big enough to socially distance the audience using the twenty new fold-away tables we bought on Amazon.

So the initial club nights were limited to forty regulars and as conditions allow, we can easily accommodate more.

It would perhaps be unfair to mention any of our regular or occasional performers here because there are so many and it would be wrong to leave any out. However, we also encourage new visitors to “have a go” if they should want to. And although the atmosphere has always been relaxed, when performers are doing their bit, the audience gives them full and quiet attention.

Every couple of months a professional singer or instrumentalist visits us, and it can be a great inspiration to the members to see these seasoned performers close up.

We’ve also been lucky enough, over the years, to attract impromptu appearances by professional artists who have just turned up out of the blue and mingled with the regular crowd. So recently we’ve been entertained by Phil Cool, and also the incredibly talented, world-renowned jazz guitarist Gary Potter. 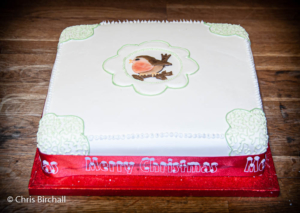