A Touch of the Blarney

Thursday night is always a great music night, but this week was something special, with Anthony John Clarke singing the likes of his signature “Tuesday Night is Always Karaoke”, wearing that cheeky grin and a twinkle in his Irish eyes.

We often use the phrase ‘it was one of those nights you just didn’t want to end’ – well this one nearly didn’t!

Anthony John announced his last song at 11.00pm, but it was almost five to midnight when the packed audience finally let him go. And up to that time, not a single person had abandoned ship, such was his engaging and entertaining personality.

As much as his music, and the songs with a liberal sprinkling of humour, he kept us captivated with his yarns, tales of his early Northern Ireland life, and his light-humoured mickey-taking, much of the brunt being fielded by his long-suffering wife, Julie, four rows back in the audience. 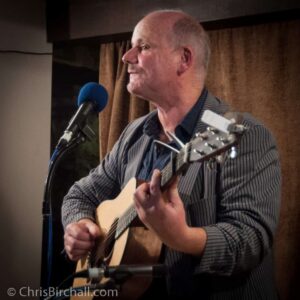 Even I didn’t escape, as I went about the task of documenting the evening. Halfway through one song, a wide grin appeared as he added a new verse “Get your camera down to the back. But we really like your hat”.

The third line of the new verse went: “That guarantees I won’t be coming back”.

He will of course. After all, who could not like this fabulous entertainer; a great song-writer with a hugely engaging manner;  unassuming, and to top it all, as nice a man as you are ever likely to meet.

Also to his credit, together with his lovely wife Julie, Anthony John remained in the room throughout both the support sessions and didn’t miss a single floor spot from our regulars: Tom & Lynda Degney, Glyn Hudson, Joe Lyon, Robin the Busker, Jim Cole, Richard Ruthin, Penni Neal and myself.