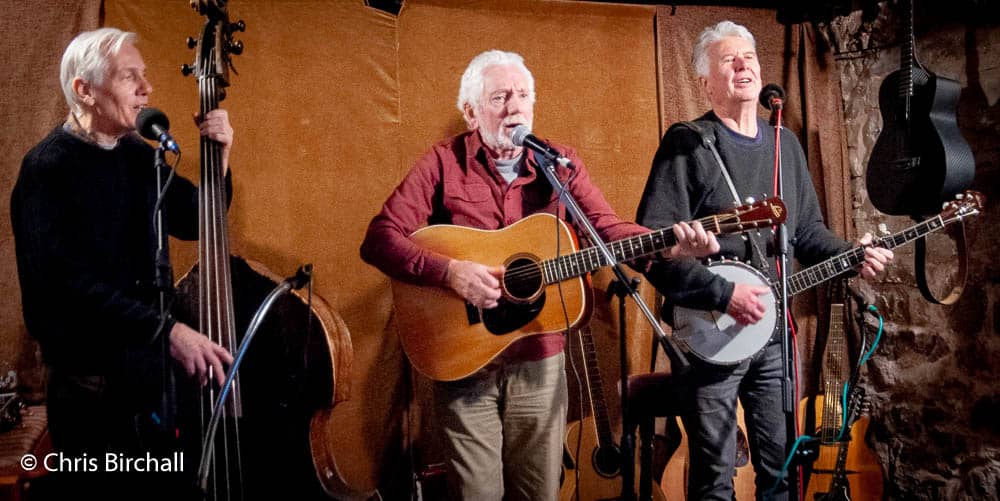 Because Ruthin AllStyles is a club with hugely popular Singers’ Nights, we tend to limit the number of Guest Nights to just four or five concerts a year, plus a sprinkling of Showcase Spots.

On this basis, we try to ring the changes and will often book new artists who have previously turned up to do a floor spot that resulted in a good reception from our audiences.

On the other hand, there are one or two acts that we are always pleased to welcome back every couple of years or so. One such is the Chester based trio, Welcomme, Finnan and Chrimes.

And we weren’t disappointed. As always, Frank, Andy and John treated us to a fabulous evening of uplifting entertainment, with musicianship and energy that belies their years. People talk about The Stones being brilliant in the autumn of their music careers. Well, I can tell you, these guys can give them a run for their money …and they look several decades younger than Jagger and co 😉

The most senior member of the band is John Finnan and it turned out that he was celebrating his 80th birthday on the very day of the gig. Pre-warned of this, we had commissioned our in-house pâtissier,  Glynis Hudson, to bake a cake. In the event, John’s wife Margaret had managed to smuggle in a cake too, so our audience on the night were very well catered for, both musically and gastronomically.

The musical side of the menu was diverse and varied, with the three alternating between various guitars, banjos, accordions and the double bass.

They gave us songs from the British and American folk scene, and from the likes of Simon & Garfunkel, with John recounting the time he was at a Chester folk club in the sixties when a young American singer by the name of Paul Simon borrowed John’s guitar for a floor spot and breaking it in the process.

There was even a Merry Hell song in the set as the lads sang Virginia Kettle’s beautiful ballad “Arundale”. 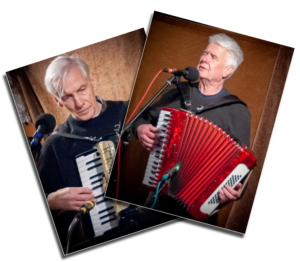 And no Welcomme, Finnan and Chrimes gig would be complete without a bit of Procol Harlum. Andy Chrimes took lead vocals and with both he and Frank Welcomme playing their respective accordions, this version of “Whiter Shade of Pale” really did skip the light fandango and was something to behold.

As is always the case on our concert nights, the support act came in the form of floor spots from some of our regular members.

It was Robin the Busker who got the evening underway, followed by ten others, each contributing a two-song set.

Following a WFC finale comprising a medley of old favourites which saw pretty much everyone in the room joining in, when I hear comments like “wonderful” and “best night ever”, it makes me feel proud of our little club and its enthusiastic members. And it makes all the behind-the-scenes work well worthwhile.

Seventeen Singers A bit of BeBop down at The Feathers