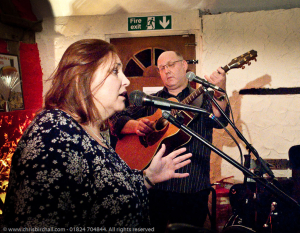 An absolute blinder of a night at the club opened by Phil Townson, who returned after a long break, with some self-penned songs about his travels.

Next up was John Williams – no, not THAT John Williams… This John Williams hails from the Wirral and treated us to a three number set that included Mark Knofler’s “Romeo” played on a cello mandolin. Brilliant stuff!

This took us up to the highlight of the evening – a 45 minute Spotlight performance by Dawn and Alan with Dawn’s exquisite vocals accompanied by Alan’s guitar playing. Their own arrangement of “Over the Rainbow” in the style of Eva Cassidy and Carol King’s “Tonight you’re Mine” were just two of the beautiful numbers that kept us enthralled throughout their set.

Joe Lyon opened the second half of the evening, followed by Richard accompanied by Tom Degney on mandolin and John on Bass both of whom I managed to hijack to back me on one of my numbers too!

The evening was drawn to a close with an extended spot by Mick, Bryn and John, better known as Raven, during which there was even dancing in the aisles (I kid you not!). The most fun you’ll ever get for a pound!