Almost Blue – Nice Work If You Can Get It

Yes it was Thursday, and yes it was Almost Blue.

I’m not referring to the sky, nor to the mood, not even to my jokes! No, the Almost Blue that added colour to our Thursday night at The Feathers, came in the shape of the recently formed jazz/blues duo of that name, otherwise known as Wendy Eastwood and Andy Murtagh.

In a departure from our usual format, Andy and Wendy were already playing as people were arriving for the evening, their music creating the ambience of a laid-back hotel piano bar. As audience members and musicians settled in and were seated, they did so to the lovely background sounds of classics such as Moon River, The Nearness of You and Fly me to the Moon.

Just after 8.00pm, as we prepared to launch into our usual first round of floor spots, the duo sang “Autumn Leaves” as a tribute to the late and much loved Bryn Roberts on what would have been his 67th birthday. It had been one of Bryn’s favourite songs, and he’d been a frequent performer at the club since its inception in 1996 right up until his untimely death two years ago.

The first of those floor spots was by Andy Murtagh’s sister, Annie, and her partner Bob. They opened with Tom Waits’ “Way Down in the Hole” followed by “Last Train at Midnight”.

Next up was another Bob. Bob Neale this time with a taste of Donovan. More Donovan was served up by Glyn Hudson with “Colours”. Then it was Richard Eastwood, whose songs had a distinct Jim Reeves flavour.

“Bus Stop” by the Hollies was the first of Joe Lyon’s numbers, and I got all sloppy with Henry Priestman’s “Valentine’s Day”.

New Face
It’s always nice to welcome a new face to our Singers’ Nights and especially one from the younger generation. Dan Cooper sang Leonard Cohen’s “Hallelujah” and the Guns ‘n Roses classic, “Sweet Child of Mine”.

Lynda Degney bade us to “Teach Your Children Well” and Tom sang about the sons of the pioneers. Tom remained on stage, and along with John Bass, accompanied Richard Davies, who sang “Sea of Heartbreaks” and “Galloway to Graceland”.

After the beer break, Almost Blue entertained us with an excellent mini showcase of six songs, finishing the set with Gershwin’s “Nice Work If You Can Get It”. 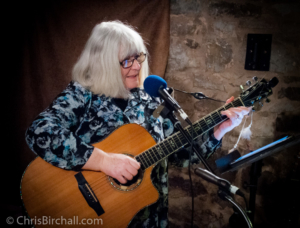 Penni Neale was also in a Gershwin mood with “Summertime”, and by way of contrast, served up “One More Cup of Coffee for the Road” courtesy of Bob Dylan.

Cath Bryan sang Joni Mitchell’s “Urge For Going” and “Take Me Away” by Oasis. 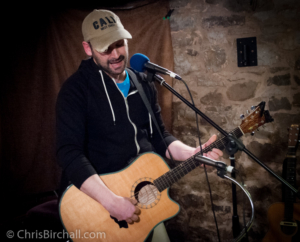 Rhyl singer/songwriter Tom Goodall is always a welcome addition to our Singers’ Nights.

This being the closest one to Valentine’s Day, he brought his good lady along. Having celebrated their 13th wedding anniversary on the 14th, he dedicated his first song to her, one of his own fine compositions, “Second-Hand Rings”. Tom followed this up with “Home Again”.

And so it was almost time for us all to go home again. For the finale, we got Almost Blue to send us out into the cold with the Cole Porter classic “Too Darn Hot”