Hardly a week goes by without seeing a new face at The Feathers. Sometimes it is someone fairly local who has come along to see what our club is all about. Sometimes it will be someone from much further afield who is holidaying in the area and turns up for an impromptu floor spot.

This week it was a cheeky chappie from Chorley who travelled almost two hours to see what we get up to.

Jayne and I met Jon Brindley a couple of months back when he performed a Guest Night at the Rhyl Folk & Acoustic club.  We’d said to him then, that he was welcome to pop in on us at Ruthin if ever he was in the area. Well I’m pleased to say he made a special journey to do just that!

As the audience settled down after the mid evening break this unassuming gent took to the microphone with guitar in hand.

Just a few bars in, everyone realised they were listening to something a bit special. The song was Lone Star State of Mind written by Fred Koller and made famous in the eighties by Nanci Griffith and later by Don Williams. Jon sure knows how to belt it out and shows his guitar no mercy.

For his second number he slowed things down a little with Something Missing, a beautiful song he started writing 30 years ago and finished only recently.

Despite cries of “more” from the floor we pressed on with our singers’ spots having promised to bring Jon back for the finale.

Many of the usual suspects where present.  Penni got all Misty, Joe took us down A Long and Winding Road and Glyn had us all joining in with Gypsy Rover.  We went Across the Border Line with Richard. Then Lynda’s musical journey took us through Green Fields and Peter told us all about the Belle of Belfast City.

John & Ros settled down in Hoagy Carmichael’s Rocking Chair, and I ventured into Cat Stevens territory with How Can I Tell You before handing over the the floor to Wendy & Richard.

In addition to their individual solo songs, they put together a super “a cappella” medley of some of the songs they do as part of the Llandudno Four-part Harmony Singers.  The group have been performing every Monday evening throughout the summer at St John’s Church, Llandudno and if you’d like to hear them, be quick – the last show for 2015 is this next Monday (September 14th). 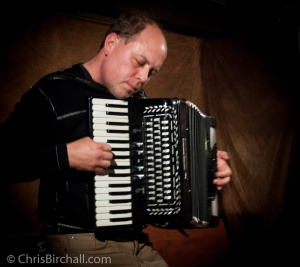 And so another great evening of music drew to a close.  But not before we got Jon Brindley back up for the finale.

This time he swapped the guitar for an accordion. His first song was Saturday Night and as the repeated cries of “more” died down he finished off with a fabulous version of Van Morrison’s Crazy Love that sounded every bit as if it was especially written for the accordion and Jon’s vocals.

It was rewarding for us to have a seasoned entertainer like Jon come up to us afterwards and say how much he had enjoyed our club. He complimented us on the atmosphere in the venue, on the sound and on the friendly and talented membership.  We have promised to get him back to perform a showcase for us within the next few months.  Meanwhile, if you can’t wait, or if you missed last Thursday’s club, click the video below to hear him sing Lone Star State of Mind.