Wow… for the third week running, the function room at The Feathers has been ‘comfortably full’ and with half those present being performers numbering just shy of twenty.

The evening began as smooth as you like, with Sade’s “Your Love is King”, performed by Mike & Rosa. We love it when these guys pay us a visit; Mike’s immaculate guitar accompanying Rosa’s lovely voice is a joy to behold. They followed up with a song in French, “La Mer”.

Listen to Your Love is King, performed by Mike and Rosa

Lizzy Pegler gave us a couple of home-grown songs. “Hilarious” was the first she’d ever written when she first started playing seven years ago. The second was her latest, “Dirty Money”.

A Scottish flavour was on the cards as Jim Cole stepped up to the mic with his trusty fiddle to play “Sarah’s Song” and “Robert the Bruce”.

Tommy Steel and Joe Cocker were on my radar, then we had a revival of Bluegrass from Lynda Degney and a helping of Americana from Tom.

Glyn Hudson enlisted the services of her guitar tutor, Skeet Williams, to accompany her on “Leaving Nancy” and “Our Town”.

Skeet remained on stage to accompany Deborah Jackson on two beautiful songs, “The Trouble with Wanting” and “Nobody’s Lonely Tonight”, before giving us a masterclass in finger-style during his own set.

Wendy was absent with a sore throat, so it was down to Richard to represent the Eastwood clan. Quite appropriately, he sang the Don Williams classic “All I’m Missing is You”. 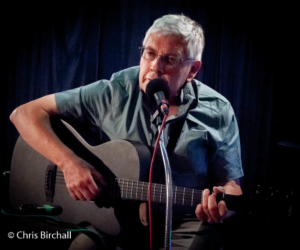 Joe Lyon took us up to the mid-evening break with “Those Were the Days” and “Sunny Afternoon”.

With a total of eighteen performers, there was only ever going to be time for one spot each. However, as is the convention, whoever opens the evening (while the bus is still filling up) also gets to open the second half, a task that was conducted in fine style by Mike & Rosa. They treated us to the French version of “Autumn Leaves” and one of their own compositions “Happy”.

After flying us to the Moon, Bing Crosby style, Pete Kirkham declared “I Wanna Be Like You”.  Then Cath Bryan gave us “Broken Wings” and Nanci Griffiths’ “Trouble in the Fields”.

We had some lovely sounds of John Denver courtesy of Geoff Durno and of Emmylou Harris from Penni Neale.

Before we knew it, it was finale time. This week the honour fell to Tom, Dick & Harry with John Bass. They served up a fine selection of songs opening with one of Harry’s early compositions “Hungry Heros”. and finishing with the Ben E King song “Stand By Me”.