You know how you get those times when things come together and everything seems to just fit into place? Well this week’s club night was one of those times.

For a start we had a good bunch of our core regulars, like the Tom Dick and Harry band who, together with John Bass, filled the room with country, blues and R&B such as “Walking Cane” and  “Dimming of the Day”.

Lynda and Tom gave us our “First Taste of Texas”. John Ryder’s set included “When somebody Thinks You’re Wonderful” and Joe Lyons sang “The Goodnight Song”.

Peter Leslie treated us to another Kieran Halpin song “Flying Solo”. Bob and Penni Neale, in turn, gave us the likes of “Crying Time” and “Stairway to Heaven”. And Glyn sang “In the Valley Below”.

Richard and Wendy Eastwood sang The Every Brothers’ “Dream”, “The Tennessee Waltz” and a lovely duet comprising a combination of John Prine and Lucinda Williams numbers.

Everyone was on top form, doing at least two songs each, and had the night ended there, it would have gone down as one of our excellent and entertaining Singers’ Nights at the club. 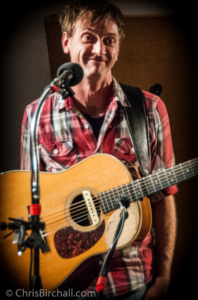 But there was more to come.  A lot more.

The weekend before, Jayne and I had attended a gig at The Black Park Chapel in Chirk, where we saw Liverpool singer guitarist Ben Hughes and Chester’s Jim Bazely. Jim had picked up one of the Ruthin AllStyles flyers we had put out at the venue and decided to look us up.

Jim is a finger-style guitarist who knocks peoples’ socks off wherever he goes, with his amazing percussive style and a fluent musical dexterity that makes you search the stage for the rest of the musicians – such is the full rich sound of his solo performances. Not only that, he is a seasoned entertainer, such fun to watch, and an all round nice guy too. Jim did two sets for us that included his own unique arrangements of classics like “Blue Moon” and “Eye of the Tiger”, and finished off with a couple of his own compositions, “Moocher” and “Autumn Flow”.

He went down so well with everyone in the packed-out function room, and the talk at the end of the evening was of how much we would love to see him come and give us a showcase.  Duly noted, folks! 😉

We love it when talented performers like this just turn up out of the blue. But tonight we were doubly delighted.

Merseyside songwriter Gary Edward Jones last came to see us about three years ago at The Cross Keys. It was shortly before the release of his first album “The Cabinet Maker” that he’d recorded with bassist Oscar South and our own Skeet Williams. That album met with huge critical acclaim and spent many many weeks at number one in the Radio Caroline charts. 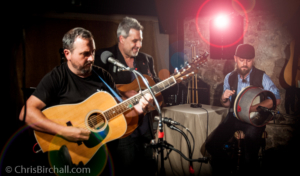 We knew Gary was working on a new album, but hadn’t realised that Skeet was once again part of the equation.

Well now the secret is out. Not only that, he is working with local percussionist James Christian (Jay) too.

The trio opened their first set with one of my favourite tracks off  The Cabinet Maker album, “Free Falling”. Gary’s talent for writing beautiful, meaningful, songs is matched only by his smooth and rich singing voice and expressive guitar style. Add into the mix, Skeet’s delicate and intricate guitar riffs, articulately finger-picked, and Jay’s subtle yet solid accompanyment on the bodhrán, and what you get is something special.

They followed this with a brand new song “Walking Home”. When I say ‘brand new’, it was written just a few days previously. Jay had never even heard the song, let alone had time to practice, yet the trio performed it to perfection.

It was a given that their second set should be kept for the finale spot. Here they did two more ‘Cabinet Maker’ tracks. “Dreaming” and “Real Life Paradise”. Then for an encore, another new song, “Oceans”. This poignant and stunningly beautiful song was written about the Syrian Refugee Crisis. The attentive silence throughout, of every single person in the room was followed by a quite rapturous applause when it ended.

What a fabulous evening it was all round.