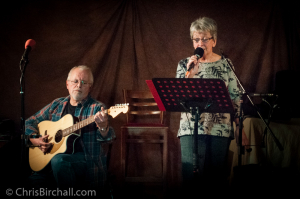 …but the welcome at The Feathers was warm and inviting!

Anyone with a hill between their home and Ruthin, of course, made the wise decision to batten down the hatches and throw another Justin Bieber CD on the fire, as the sleet and snow continued into the night.

Sadly, that included the young lady booked to perform a Showcase Set for us this week. Cath lives halfway up a mountain where gritters feat to tread, so venturing out was simply not an option. We’ll rearrange the date and look forward to hearing what she has in store for us in the not too distant future. 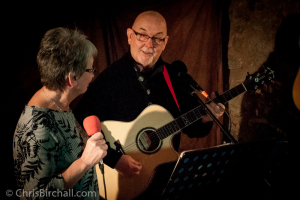 Nevertheless, nineteen of us flatlanders braved the wintry conditions to enjoy a fine evening of music and merriment. Despite being down to about half the numbers we’ve become used to, there was a great atmosphere with bags of banter and four songs from each of the nine musicians.

Robin kicked things off with a stroll down Springsteen’s “The River”. We had some Beatles and Hollies from Joe. Lynda Degney treated us to some Troggs with accompaniment from husband Tom, who then took to his Dobro for a fine Jerry Douglas instrumental. 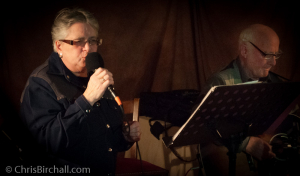 There were two tributes to David Bowie. Richard did “Heros” and I did “Sorry”. The latter, of course, having been a hit for The Merseys, some seven years before Bowie got hold of it.

With Neil on guitar, Enid sang an excellent set that included songs by “The King” and by Queen. She also stepped up to the mic to join Robin on Leonard Cohen’s “Hallelujah”. 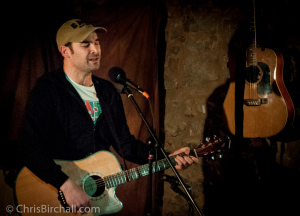 It was good to see a return visit by the folk rocker from Kinmel Bay, Tom Goodall. We enjoyed three of his own compositions: “Steel”, “Flaws” and “Let’s Get Married”, which are all testament to his skills as a singer/songwriter. Then for the finale, Tom sang an interesting and unique version of “Sweet Child of Mine” and for an encore, Ryan Adams’ “Come Pick Me Up”.

More of the same next week folks – but without the snow, please 🙂