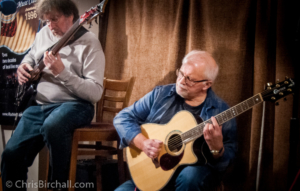 When is a band not a band…?

When it’s two-thirds of a band or even three-fifths of a band!

We were all geared up for a set from Breeze, comprising the gorgeous guitar work of Neil Wilkinson, the beautiful bass accompaniment of John Rowell and the velvety vocals of Llinos Finnie. Sadly it was not to be, as unforeseen circumstances meant Llinos couldn’t get over to the club. Happliy, we were instead treated to some inspiring instrumentals from Neil and John, including Dire Straits’ “Going Home” and Neil’s cool composition “Snowflakes”. 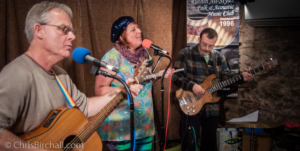 John, of course is also a key member of the Tom Dick and Harry Band. We were Harryless tonight and Raphael-less too, so they morphed into the Tom, Dick and John Trio, with Richard Davies on lead vocals.

Because the Breeze wasn’t in full force, the clouds didn’t blow away. And by ‘clouds’, I do mean, of course, ‘The Amazing Clouds’ comprising Pete, Di and Dom. They floated along in their full glory to both open and close the evening with three very fine sets, which included their super version of Fleetwood Mac’s “The Chain”, and the colourful and catchy “Rainbow’s End” written by Dom.

We had two new faces at the business end of the room: Denbigh’s Roy Charlesworth (below) who brought us some Beatles treats, and bassist John Helm who accompanied me on a rocky version of “Whiskey in the Jar” with Tom Degney adding his magnificent mandolin into the mix. 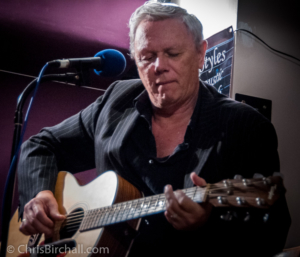 The hard-working Tom did a solo spot and accompanied his good lady Lynda. Bob Neale rustled up some Ry Cooder and Woody Guthrie, Penni Neale performed some Richard Thompson and kept us amused with “Say The Same Things Twice”, Glyn Hudson had the whole room joining in with her a-cappella songs.

The weather may have intervened to reduce our numbers somewhat, but the fourteen performers put on a great evening for the assembled audience.

All Cake and No Bears Hot-spot amid the Arctic chill