Ben and the Baker’s Dozen

No, it’s not the name of a new band. It was the roll-call from last Thursday’s line up at Ruthin AllStyles.

In addition to this week’s Showcase performer, thirteen of our regulars conspired to provide a fabulous and diverse evening’s entertainment ranging from the likes of Crystal Gayle and Jim Reeves from Richard and Wendy Eastwood, J.T. from Peter Leslie and The Beatles from Joe Lyon.

Chris sang Foggerty and Christy Moore numbers. Cath Bryan’s diversity included songs from The Pretenders and Springsteen. And we had a nice bit of twelve bar blues from Richard Davies in the form of a Hank Snow song followed by Steve Earl’s “Pilgrim”.

John and Ros Ryder sang “I Saw The Light” and then two songs about a kiss which they concluded by acting out the lyrics. Maybe they should have followed up with Lloyd’s “Get A Room” 🙂

Showcase
The highlight of the evening was a half hour showcase performance by Ben Robertson. At the age of just nineteen, Ben is fast establishing a presence on the local folk and festival circuit. He has an accomplished guitar style with a maturity that belies his years. He is articulate and precise whilst at the same time fluid and easy to listen to. 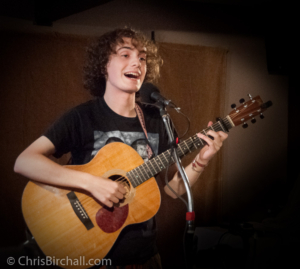 His set included a couple of lovely instrumentals including Arany Zoltán’s “King of the Fairies” and his wide ranging vocal covers included songs from Pink Floyd and Richard Thompson. In fact his version of Thompson’s “Bee’s Wing” was one of the most beautiful I have heard.

Ben is currently studying for a science degree at Manchester but I predict we will be seeing a lot more of this gentle natured and unassuming folk singer from Pentre Halkyn in the future. He is certainly very welcome to make a return visit to Ruthin whenever he wishes.

Wales vs England vs AllStyles Warm Welcome on a Damp Thursday