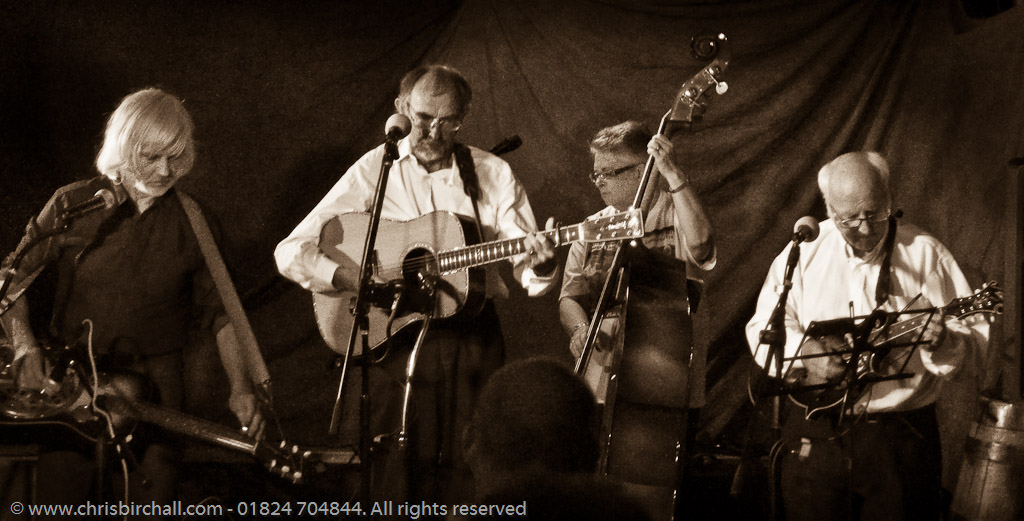 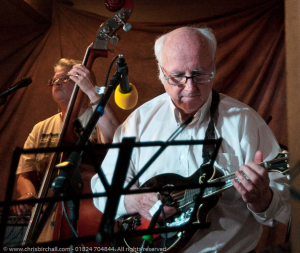 Half of the band, of course, have all but taken up residence here in the Vale, as Tom and Lynda Degney are regulars at the club. They make the journey from Rhos on Sea most every week with Lynda on vocals accompanied by Tom on guitar. And as we know, being a multi-instrumentalist, Tom also steps up whenever asked to accompany a whole host of members on his mandolin or dobro.

In the band though, their roles change somewhat with Tom on banjo and mandolin and as we soon discovered, Lynda plays a pretty mean upright bass. Ian, who has visited the club in the past, played dobro and completing the line-up we had Tony on guitar and lead vocals.

These fab four bluegrass buddies provided a highly enjoyable half hour Showcase Spot that had the audience foot-tapping and singing along.

The rest of the evening was filled with a fine selection of floor spots from regulars Harry, Richard, Chris, Tim, Mike Kendrick, John Bass and John Ryder.

Dave Hytch brought along his rich baritone voice and recruited a ruck of AllStylers to form an impromptu backing band.

Elaine joined us from Denbigh with some Joni Mitchell songs, and Wendy with numbers from the likes of Patsy Cline.

To round off what was yet another super evening we had some blues courtesy of young Brandon Ridley from Rhyl who was making his first ever visit to the club.

Fifteen performers in all and a packed house!

Singer’s Night next week folks with Enid hosting the evening – so you’ll have a no doubt welcome break from yours truly’s corny jokes!