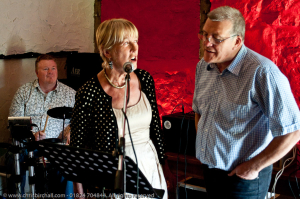 Well by all accounts The Hiraethog Pubs Festival was a resounding success and it was great to see the the Cross Keys bursting at the seams as the buses arrived every twenty minutes to drop off a new batch of revellers and transport the previous lot to the next pub on the route.

From our point of view it was a nice opportunity to entertain and have a day of jam sessions.  There was more equipment  set up in the upstairs room than I’ve ever seen there and even a full digital drum kit!

Mark and John took turns to provide bass accompaniment to anyone who wanted it.  There was an interesting moment when the Alibis drummer Alan turned up to play guitar so Mark (their bassist) took to the drums.  A good Mix ‘n Match – and a great sound! 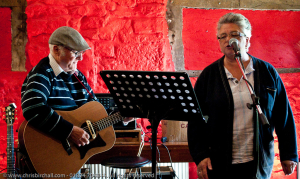 Tom and Linda put in a good long afternoon shift as did Stephen, John and Ros. And they were all in fine voice.  Wendy and Richard came over from Rhyl and Wendy did several excellent spots during the day. As indeed did George.  What a star!

There were several impromptu collaborations, the most memorable was when a member of the audience decided we were all singing Calon Lan wrong, so he stepped up to the mic and give the most out of tune drunken rendition ever heard, before returning triumphantly to the bar. Unperturbed,  Maureen and her assembled group proceeded to start again – and did it beautifully of course! 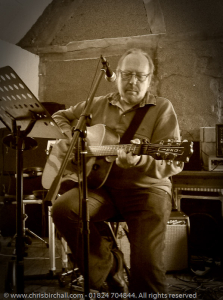 I enjoyed getting through a few Beatles, Dylan and Passenger numbers, which I apparently played in the key of sepia if Jayne’s picture is anything to go by.

And in the spirit of audience participation, when I announced my first Passenger number, some wag  yelled out “Bloody ‘ell, he was on our bus”!

Raven went down a storm, of course as they always do, and had the audience literally dancing in the aisles.

The long service award must go to Joe Lyon who was first to arrive to set up the gear and last to leave at the end of the evening.  In addition to which, of course, he fitted in several sessions at the mic delivering a whole raft of numbers that we know and love.

All in all it was a fun day with a good number of people popping up to listen, both in the room itself and in the beer garden to the side of the stage.

I’m sure the day was a success from the pub’s point of view.  Certainly Jess, her Mum and Dad and the staff were kept busy all day long.  And as a nice touch, Liz had baked a whole trayful of the nicest fruit loaves for us each to take home.