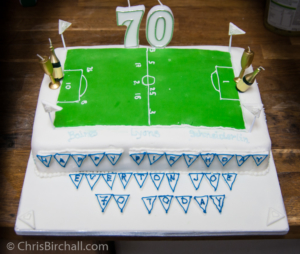 We tend not to do the birthday cake thing these days. Our numbers have increased significantly in recent years and we’d end up having to hold our club nights in a bakery!

But when someone who has been such a good and loyal friend of the club reaches that certain age (50 with 20 years experience) cake was indeed called for, and cake we had.

Joe Lyon steered the club during its final year at Ye Olde Cross Keys Inn, helped oversee the move to our current venue, and to this day still plays a big part in the setting up and running of our club nights.

Music aside, Joe is also a big sports fan, a fact that was not lost on cake-maker extraordinaire Glyn Hudson, who produced this magnificent themed masterpiece. He is also a really good sport himself, forever with a cheery smile despite the constant ribbing  he gets about supporting the Blue team instead of The Reds.

Joe’s old home town always features prominently in his choice of songs too, this week’s offerings included one of his favourites, “Strawberry Fields”.

It was Peter Leslie who kicked-off the evening with “Relentless Rain” and “This Island”, both a fine testament to his song-writing skills, and he also managed to slip some Simon and Garfunkel into his set.

Pete and Di also treated us to a lovely self penned song called “The Seal”, plus “Close to You” by The Carpenters, featuring vocals and a fine flute interlude from Di. In their second half slot, Di transformed into Vera Lynn, complete with black sequined dress and red berret to sing the classic “Bluebirds Over the White Cliffs of Dover”. Wonderful!

Ron from Wrexham opened his set with Foster and Allen’s “Maggie”. It was a belter. Geoff from Rhyl gave us “All The Lies That You Told Me” by songwriter Christie Hennessy, and Richard Ruthin came up with a great version of “Little Old Wine Drinking Me”.

Some Dylan and Hansard from Yours Truly then it was over to the ladies.  Enid Toft sang the beautiful Welsh song about unrequited love, “Myfanwy”, with accompaniment provided by Richard and Tom.

Lynda Degney also recruited her husband Tom to join her in “A Boat on the River”. Cath Bryan paddled her own canoe, first with a lovely song of her own before taking a “Look at Life From Both Sides Now”, Joni Mitchell style.

Glyn Hudson sang “Wild Mountain Thyme”, the 30 second clip of which (in the Snippets recording on this page) got us a “copyright violation” notice from YouTube!  WTF… The song originates from the 1821!

I wonder if Penni Neal gets copyright warnings? “Time After Time”, no doubt, for singing such a lovely version of that classic Cyndi Lauper song.

There were two new faces on the performers list tonight. They were father and daughter duo Hanna and Nick Durham, who earned this week’s ‘long distance award’ travelling, as they did, from the hamlet of Penmachno, south of Betws-y-Coed.

In the first half, Hanna sang Greg Holden’s “The Lost Boy” to her Dad’s guitar accompaniment followed by a quite exquisite cover of the Dolly Parton classic “Jolene”.

For the evening finale, however, they went solo, Nick singing the Bill Caswell country song about a tractor “Sweet Allis Chalmers”. And it was Hanna who provided us with the home-time earworm, as she took to the electric piano to sing Bonnie Raitt’s “Can’t Make You Love Me”. This is a much covered song and I will stick my neck out and say that this was without doubt one of the finest versions I’ve ever heard.

Aren’t we so very lucky to be able to spend a Thursday evening listening to such a diverse range of fabulous music, courtesy of the talented people who frequent Ruthin AllStyles Music Club.

Let’s do it all over again next week

In Like a Lion Gaelic Songs, Scots Jokes and Other Shenanigans