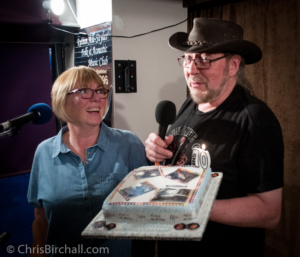 It was some auld git’s birthday, so there was cake. Lots of it. Which was just as well, as there were over forty gannets in the room. Almost half of these were Performing Gannets, so there was also plentiful serving of music.

And, as is obligatory for a Ruthin AllStyles Music Night, there was lots of fun too.

Some of the usual suspects were there, of course. Joe Lyon, Tom and Lynda Degney, David Rees, and Peter Leslie, all contributed a wonderful mixture of covers and self penned songs to the summer evening gathering.

It had fallen to Pete and Di to get things off to a rip-roaring start with their special blend of vocals, flute and guitar, and then later in the evening, they challenged us to a “Name That TV Theme Tune” segment which went down well with the knowledgeable audience.

Ron (from Wrexham) Stevenson put in his two-penneth. Well… a Five Penny Piece worth actually. And then Jim Cole was a merry old soul as he called for his fiddlers three. They didn’t hear him, so instead he treated us to some fine Scottish jigs himself.

The maker of the delicious birthday cake, Glyn Hudson, had everyone singing along with some traditional folk ditties, plus the (embarrassing for the recipient) traditional birthday song.

Then it was the beer break, during which the cake was cut, the raffle was called, and luthier extraordinaire Harry Miller told a witty tale or two.

In the second half, Wirral’s John Williams treated us to some fine stuff on his cello mandolin, and Jayne in particular, was delighted that his set included the Stereophonics hit, Dakota. And he had the whole room singing along to Wagon Wheel.

Dawn and Alan Hesford, aka Arora, descended to spread some Sunny Rhyl sunshine on the evening with a helping of Take That, Simon & Garfunkel and Joni Mitchell.

In the finale spot this week was the recently formed duo, Chester Weiss and John Bass.

These guys have been pretty busy on the folk and festival circuit in recent weeks, and after hearing them tonight, we can see why.

It was a great way to end a great evening of merriment. And on a personal level,  I’d like to say a big thank you to everyone who made it so memorable. You made a happy man very old 😉