Yes, the smiles came thick and fast on our fun-filled virtual trip across the Mersey, to the Albert Dock, past the Beatles Statue, and onward to Matthew Street.

The scene was set in the intro with a video of the Mersey Ferry (courtesy of North Wales YouTuber Michael R Gentry) to the accompaniment of Gerry Marsden’s “Ferry Across the Mersey” sung by our favourite ex-pat scouser, Joe Lyon.

The Liverpool Sound was very much in evidence throughout the evening with some cracking songs, thirty-eight in all, and I loved the way that those which were not even related to Merseyside were given a sometimes rather tenuous connection by their performers.

With kind permission from another YouTuber, Paul Frost, we were able to present most of the show aboard the Royal Iris on a Mersey Ferry Cruise from Woodside to the Pierhead, with some stunning views of the Liverpool seafront.

Wirral’s country duo, Sarah-Lou and Jimmy Rae, aka Tennessee Waltz, were the last guest night performers at The Feathers before we went into lock-down.

So it was fitting that they should sing Jimmy’s wonderful anthem “Under the Mersey Moon”, for our finale spot, hilariously accompanied by Sarah’s cat, Jazzy, on tambourine.

Week 20 – On the Ferry Across the Mersey

Week 20 – On the Ferry Across the Mersey

Well, since Boris said we should all go to the funfair in a bid to rescue the economy, we were delighted you all joined us on the Carousel and the Big Dipper for last Thursday’s music night.

Lots of lovely songs – 38 in all – from all you lovely people helped the merry go around.

Next Thursday’s theme is Liverpool – but don’t worry if you don’t have any songs with a Merseyside connection, all musical contributions are welcome. And if you’re doing any well-known popular songs, send in a couple of different ones so we can avoid any duplication.

Because the weather couldn’t decide whether or not the summer had been and gone, we headed north, to the edge of the Arctic Circle, for our theme this week.

And with upwards of eighty revellers packed in at any given time, there was a warm welcome in the igloo, along with a guarantee of lots of cool music.

As we sat there on our frozen assets, the music came from all over the world …and beyond. Barry Welsh sang about South Australia, Lynda Degney sang under the Carolina Star, Carol Roberts sang from Across the Great Divide, Bob Neil had got the North Country Blues, Jenny Harris-White declared, The World Has Gone to Pot but Penni Neale assured us it was, in fact, a Wonderful World.

Looking at those song titles, you’d be excused for thinking “South Australia” gets the Farthest-Place-From-Ruthin award, but you’d be wrong. “Armstrong” is a song about the first man to land on the Moon, back on July 20th, 1969, Geoff Durno sang it, so he takes that particular prize.

The club’s crooner extraordinaire, Bob Hall sang an excellent “There but for Fortune”. Unfortunately, Bob was watching from a hospital bed this week. We all wish him a speedy recovery and hope he is back home soon.

We are well used to seeing Linda Griffiths providing those lovely harmonies, duetting with her brother Alan. Tonight she was flying solo and lovely it was too.

It was good to see John Williams again, and Anthony John Clarke. Then there was the Mighty Jabberwocky, and All Strung Up who played The Mighty Quinn.

All in all, yet another great virtual music night as we wait patiently for the day we can all get back together again.

Our Ayre Bridge to Paris

Seeing as the government have opened up the “Air Bridges” we decided it was time to create our own Ayre Bridge from Ruthin AllStyles to take in the la musique, Parisian style, and the result was Oh là là.

And who better to add the stamp of authenticity than the lovely Flossie Malavielle. Her rendition of Édith Piaf’s “La Vie en rose” sent chills down our spines and planted us firmly in France.

Other than to elicit contributions from Flossie, and Rosa and Mike, we had decided not to announce the French theme in advance due to it being very much a last-minute idea. In hindsight, maybe we should have, because a couple of our regulars have since said they would have mustered up something with a French flavour.

Once again our regulars came up trumps with songs from a wide range of genre befitting of our club’s AllStyles epithet.

In addition, it was one of those nights (which often used to happen during our time at The Feathers) when several of our occasional visitors turn up out of the blue to enrich our evening’s entertainment. This week we were delighted to welcome back Phil Chisnall, John Williams, Gary Edward Jones, Frank Hives and Anthony John Clarke.

And for the finale spot, Paul Donnelly accompanied Flossie Malavielle to take our breath away with their lovely rendition of the beautiful Martyn Joseph song, “Can’t Breath”.

See you all next Thursday for another cool evening of cool music.

PS: Don’t forget to record ar song with a festival flavour for our August 6th show.

Week 17 – Our Ayre Bridge to France

False Flag
If you were watching the live stream last Thursday evening you’ll know that it disappeared after ten or fifteen minutes, due to Facebook’s content algorithm falsely flagging up the background music to our “5-minute-countdown” intro as a copyright infringement.

The fact is, we had acquired that intro video from a YouTube channel that offers copyright-free videos and music that can be used without restriction. So either they inadvertently used someone else’s copyrighted music, or maybe Facebook’s algorithm was having a bad hair day.

The Show Must Go On
Either way, it was a damn nuisance, but we managed to quickly reset everything and get our show back up and running after four or five minutes.

Unfortunately, Facebook also temporarily blocked us from embedding our videos so anyone watching here on the website would have missed the rest of the show.

Luckily, I was able to download both portions of the show, including the blocked bit, and stitch them back together (minus the disputed intro) for you to view in its entirety.

Click the video below to view
We hope you enjoy it, along with the many fine songs and excellent performances.

Talk about Social Distancing… we ended up being really ‘spaced-out’, having been abducted from our dilapidated caravan on a Yorkshire campsite to some far and distant planet.

But that didn’t stop us enjoying a fabulous evening of musical entertainment that was light-years ahead of anything Barnard Castle had to offer.

It had everything from Meatloaf to Buddy Holly, from Damien Rice to Don Williams, from Nora Jones to Tanya Tucker, courtesy of our Ruthin AllStyles regulars.

And just when we thought it was all over, along came Jabberwocky with “Fool if you think it’s Over”.

Thirty-seven musicians, a fabulous brand new original song from Elfin Bow in the finale and an End of the Show Overflow Show featuring the mighty Fiddlestone, Gareth Morris, Janice Marie, Sonya Smith, Jenny Harris and Kev. What was there not to like!

This Thursday’s show will be a special fund-raiser the help 2,400 refugees, including 500 children, living in appalling conditions locked down on the small Green island of Leros

We will let the Tin Shed’s Joanne Edwards explain…

It is well documented that when Lynda sings about rain, it damn well rains.

And sure enough, no sooner had Lynda and Tom Degney finished singing “A Walk in the Irish Rain” during the intro, our virtual camping trip succumbed to a virtual deluge.

Not that the evening was a wash-out, of course, in fact, far from it, we had many fine and wonderful songs from no fewer than forty-four musicians (plus half a dozen more in the Overflow Show).

Camping and the wet stuff featured in quite a few of the songs though. Robin Spreckley sang about rivers running high and Robin the Busker found a canal to busk alongside. 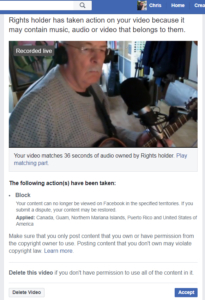 Anthony John Clarke and Julia sang “I Hate/Love Camping”, Vicky and Rob sang about “Purple Rain”, Cath Bryan found the “Rainbow Connection” and I asked, on behalf of John Fogerty of course, “Have You Ever Seen the Rain”.

Steve Jukes-Hughes’ song was about sitting in the camp-fire light with “The Ghost of Old Tom Joad”, whilst Stephen Croft was lured (against social-distancing guidelines) “Into Temptation” when confronted by a Crowded House.

Harry Robertson just went ahead and booked himself into the “Hotel California”, something that Facebook didn’t take too lightly because no sooner had Harry finished his song, we were slapped with a copyright infringement notice informing us that 36 seconds of the video was being muted in Canada and the USA. I can only think that Harry’s magnificent guitar intro was so faithful to the original, Facebook’s algorithm decided that it was, in fact, the Eagles original we were playing!

Despite Mr Zuckerburg’s social platform pissing on our parade, we went on to enjoy yet another fab evening of music and mirth which included a lovely Emmylou Harris number by Sarah Lou and Jimmy Rae, plus the premiere of a brand new song by Alan and Linda Thompson, “Lay Those Cards Down”.

The culmination of the evening saw Skeet and Deborah, aka Jackson Williams, singing two beautiful songs off their just-released album  “Venus and the Crescent Moon”. A super finale to a great night. 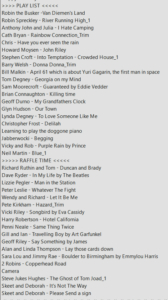 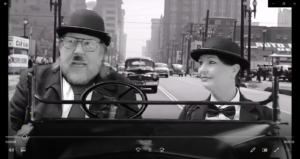 It was Thursday so we jumped into our Model T Ford and headed out in search of the Ruthin AllStyles Music Club.

However, things are not always as black and white as they seem but we met a lot of mighty fine musicians along the way, starting with John Helm who was “Stuck in the Middle” with Pete Hodgeson and Pete Hodgeson. 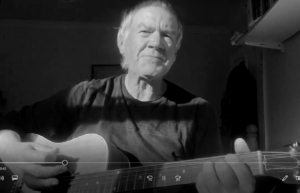 Pete also lent his video mixing skills to the Eastwood sisters, featuring Wendy, Wendy and Wendy who harmonised beautifully on “After the Gold Rush”.

Along the way, we bumped into Robin busking at the “Red Rose Cafe”, just down the road from “Hotel California” where Vicki Riley was singing.

Around the next corner, we came across Howard Moysen playing the “Five String Serenade” on a six-string guitar. 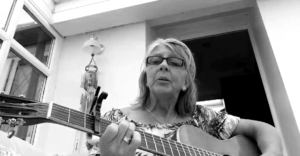 The night featured thirty-seven fabulous songs from no fewer than forty-nine talented musicians.

And having each performed their individual songs, Tom, Dick and Harry got together with John Bass and Raphael Callaghan, in the finale spot, for a pre-lockdown rendition of “Dimming of the Day”. I reckon that brought a lump to many a throat amongst the 100 plus who tuned-in and rekindled yearning for the time we’ll be able to gather again, in person, to enjoy each others music, company and comradeship.

For those of you who like statistics: At the time of writing (Monday night) this week’s video stream has been viewed 948 times.