Amazing as these three cloud types are, I usually associate them with landscape photography.

It was far too dark for such an activity on Thursday evening, of course, so it was just as well they manifested themselves in the shape of Pete, Di & Dom, aka ‘The Amazing Clouds’.

This three-piece band from Corwen paid us a visit ahead of a gig they are playing at The Centre, in Ruthin on the 24th November, alongside the equally amazing John Williams.

They opened up the evening by taking us to a place not normally associated with having any clouds at all, with sounds of the Arabian Desert in “The Sandstorm Set”. Later they deposited us in foggy old London with Cockney Rebel’s “Make Me Smile”.

Lynda Degney took us to the “Northern Plains” as Tom went “Clickedy Clack” down the railway track, whilst all the time Richard Davies was “Living on Tusla Time”.

The tale of the “Ballymore Fiddler” was retold by Glyn Hudson in nya nya nya fashion, and Joe Lyon was dreaming “Dansette Dreams” and yearning for “A Place in the Sun”. 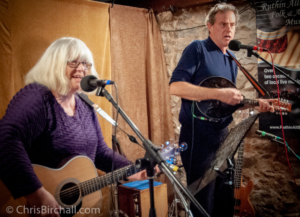 My own contributions came courtesy of Willy Nelson and Bread.

“One More Cup of Coffee for the Road” was on Robin Spreckley’s mind, for which he was joined by Penni Neale.

Young Tash Allcock made a welcome return to the club, juggling her musical endeavours with her academic studies. Alternating between guitar and ukulele she treated us to three lovely songs including Elton John’s “Yellowbrick Road”. 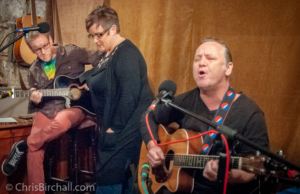 Linda also provided some beautiful backing vocals for her brother Alan’s own sets which included the Tears for Fears hit “Mad World”.

It was Penni Neale took us up to chucking out time with Richard Shindell’s beautiful, “Ballad Of Mary Magdalen”.