Eagles songs always go down well at the club, and tonight it was inevitable that the news of Glenn Frey’s death would result in one or two being sung in tribute. It was Penni, Chris and Harry who did the honours. 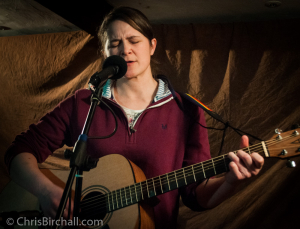 Young Blood
Ruthin AllStyles has a tradition of welcoming new faces and it’s particularly pleasing when this also brings the average age down a little with some younger performers taking to the microphone to balance out us older fogies.

Alex (right) has been coming along to listen for the past couple of months. Tonight she turned up armed with a guitar and performed a lovely and diverse set that included Brian Bedford’s “What’s the Use of Wings”, the Dusty Springfield number, “I Only Want to be with You”, and the Johnny Cash classic “Hurt”. 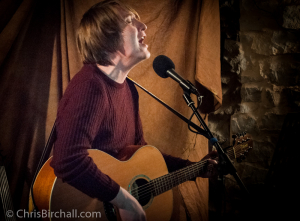 Denbigh singer/songwriter Martyn Peters (left) sang a powerful and polished set including “The City”, which he wrote during his student days in Liverpool, and “Drowning” – a song describing his feelings returning home after travelling around Australia.

Hopefully, we will get more youngsters turning up once more of them realise that our Singers’ Nights offer an appreciative and attentive audience, compared with having to compete with the loud chatter and general bar noise of pub-goers  – as happens at many open mic events. 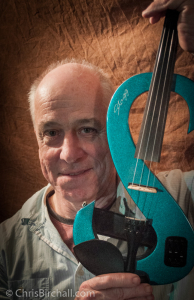 Skeletons
The reference to “skeletons” in the title of this post has nothing to do with our – how shall we say – “more senior” members. It refers to a couple of the fascinating looking instruments that appeared this week!

We’ve see Jim’s “S” shaped electric violin before, of course, and tonight, as well as a jaunty Scottish medley in honour of the forthcoming Burns Night, he performed a belter of a number accompanied by Tom on mandolin and John on bass.

And then when Harry announced that he’d bought a new guitar… well, we could see right through it! 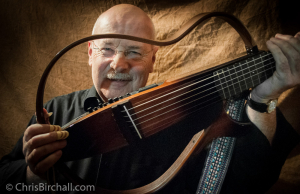 It is a Yamaha ‘Silent’ guitar.

So what’s the ‘silent’ all about?  Well it’s an electro-acoustic guitar that barely has any acoustic volume, so you can stick a pair of headphones on and practice while the rest of the family watch the tele!

But when Harry plugged this so-called Silent Guitar into his amplifier… Wow! It produced a highly realistic electro-acoustic guitar sound.

I have to admit it sounded great and Harry’s new toy was particularly suited to “Hotel California” which he performed as the evening finale.

All in all, it was another great Singers’ Night with fifteen performers and a total of thirty two in the audience.


• We’d love to hear from you. Just click the “Comments” link below and say “hello”. 😉
Baby it’s Cold Outside Penni for your thoughts