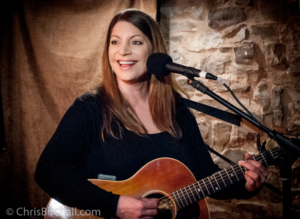 “The sweetest voice in England”, “Like a soft blanket” and “A very talented young lady”, are just a few of the many plaudits Edwina Hayes has received from the likes of Nanci Griffith, Perez Hilton and Michael Parkinson.

We saw all of the above, and more, as this lovely lass from Yorkshire played to a capacity crowd at The Feathers Inn last Thursday in the latest of our series of Intimate Concerts.

Having opened shows for the likes of Jools Holland and Van Morrison, Edwina has performed at many prestigious venues including The Royal Albert Hall.

This week she put the same warmth and passion into performing for us at Ruthin, as she did when she played at the iconic Glastonbury Festival.

She gave us an insight to how she had got into performing and song writing, before opening her set with a song off her second album Pour Me A Drink, entitled “Leave A Light On For You”, followed by her first public performance of a brand new song, “It’s All About Love”.

And the fifty music lovers who were packed into the pub’s function room, responded with rapturous enthusiasm, hanging onto every word as she delivered a lovely mix of Country and gentle Folk-Americana. 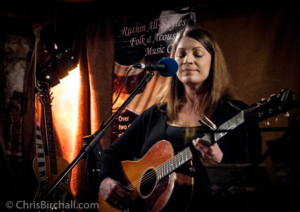 They were singing along with many of the well-known covers that she interspersed with her own material, including the songs of Bob Dylan, Richard Thompson and that famous Randy Newman song, Feels Like Home, which Edwina recorded for the soundtrack of the Cameron Diaz film, My Sister’s Keeper.

And to bring a wonderful evening of music to an end, her encore included another brand new song, “Fare Thee Well” and the Nanci Griffith song “I Wish it Would Rain”.

Before each of Edwina’s two 50 minute spots, the audience were given a sample of Ruthin AllStyles Music Club’s home-grown talent, with an eclectic mix songs from a dozen of the members.

There was time for one song each with one or two members delivering another after the break – to fulfil requests from our guest! 🙂

Amongst them was someone who just happens to be one of her biggest fans. In fact, hardly a week goes by that Wendy Eastwood doesn’t sing an Edwina Hayes song. Wendy’s enthusiasm was one of the reasons we decided to book Edwina, to hear her perform those lovely songs in person.

A Cracker of a Music Night Star Turns, a Great Turn-out and an About Turn