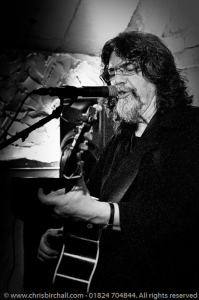 Little did I know back in 1978 as I sat next to Whispering Bob Harris in Wembley at the start of ELO’s spectacular “Spaceship” world tour, that the lead singer of their support band Trickster would end up being a frequent visitor to our little folk club in Ruthin!

Once again we have been privileged to welcome Phil Bates back to the club, despite the fact that last time he rocked the rafters of Ye Olde Cross Keys he announced it was has last UK gig.

That was thirteen months ago and although Phil Bates has since moved to live in Berlin, he recently emailed to say he would be in the UK for a couple of weeks and would love to look in on us again.  Needless to say, we snatched his hand off.

What a joy it is to be entertained by such an accomplished musician in the intimate surroundings of a market town pub, particularly when it is someone who has performed in such prestigious venues as Wembly Stadium and Carnegie Hall, and still fills arenas all over the world with his bands ELO Klassik and the Phil Bates Band! 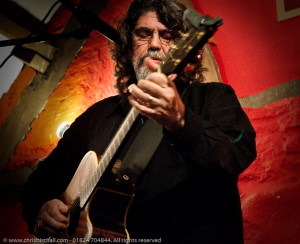 Phil gave us a fabulous evening’s entertainment with his own re-worked versions of songs from the Beatles, the Stones, Steve Earl, Ray Davies and many other 70’s and 80′ classics as well as several of his own compositions.  For me, one of the highlights of the evening was the ELO classic Can’t Get it Out of My Head, originally a full orchestral number that he transposed into an acoustic performance beautifully.

Phil’s guitar has always intrigued me. It is as battered and holey as Willy Nelson’s yet in the main he finger-picks.  Last night however, he performed an instrumental number which he described as Celtic Punk, and his use of the plectrum gave a good insight as to how the hole became worn into his trusty Takamine acoustic!

All in all it was a terrific entertainment with absolutely top class music all night. Starting with Harry and John Bass opened with half a dozen numbers, right through to when John returned to the stage to accompany Phil Bates for three or four numbers in the finale.