Elfin Bow – A Fairytale at The Feathers 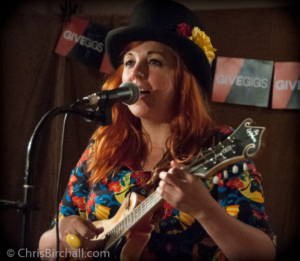 Forty-four folk fans witnessed something special at The Feathers tonight. Some had heard Elfin Bow before, some had heard about her, some had seen my relentless banging-on about this gig on social media for the past week, and succumbed to their curiosity. But of one thing I’m certain, all were glad they came.

As people were leaving at the end of the night, the compliments were flowing freely. It was heartening to eavesdrop these parting conversations. “Lovely”, Wonderful”, “Brilliant” were just a few of the superlatives I could hear being bandied about. One person came up to me and said “I’m lost for words – gobsmacked”. 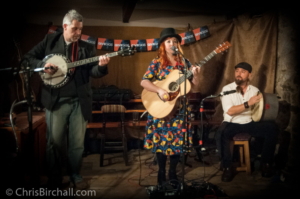 Nice to know my ‘banging-on’ about it had not been in vain.

Elizabeth Anne Jones, aka Liverpool musician Elfin Bow, is in the final stages of preparing for the launch of her first album.

Based upon what we heard tonight, I think I can safely predict it is destined to be met with the same critical acclaim as her husband Gary Edward Jones’s first album “The Cabinet Maker” which spent several months in the Radio Caroline album charts in 2014, knocking U2 off the number one spot. 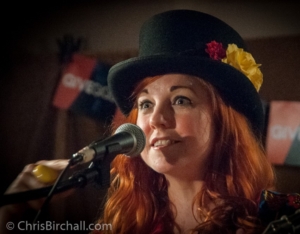 I’m sure that once this album is released, and the songs get the airplay the deserve, Elfin Bow will be filling venues throughout the land, without the likes of me having to ‘bang-on’ to publicise them.

Elfin Bow has an unassuming, yet commanding, stage presence. With outfits that reflect her love of art and colour, this lovely lady lights up the room.

Her original songs are beautifully constructed, some delicate, some lively and, true to the modern folk tradition, they all posses an interesting back story. Similarly, when she sings the odd cover, she makes it her own.

For her showcase tonight, this Liverpool lass alternated between guitar and mandolin and was accompanied by local musician Skeet Williams and percussionist James Christian. Having spent recent weeks working with her in the studio on material for the album, the pair have become fully attuned to her somewhat unique style. 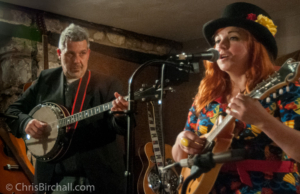 Skeet, renowned for his intricate finger-picking guitar technique, has skillfully transferred this to the banjo. His delicate fills and riffs elevate that much maligned instrument way beyond its bluegrass roots. 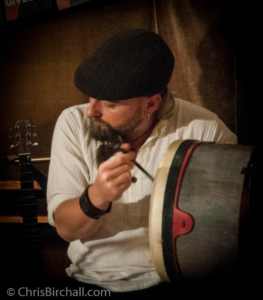 The bodhrán, most commonly regarded as being the heartbeat of traditional Irish music, is most commonly to be heard competing in the loudness stakes with the clapping of hands and the clacking of clogs.

James has skillfully reined in and tamed this ancient instrument, using the tipper, the brushes and his bare fingers, to provide the subtle percussive accompaniment so fitting for Elfin Bow’s songs.

During the many ballads, we found all three instruments giving the vocals space, room to breath, unrushed and relaxed. You could almost hear a pin drop as the audience hung on every word of Elizabeth’s beautifully crafted lyrics. 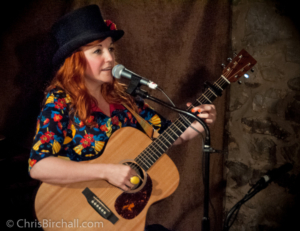 Elfin Bow’s Showcase consisted of 40 minute mid evening performance, plus an extended finale at the end of the evening.

Of her original material, I found it hard to pick a favourite. On each of the three other occasions I’ve heard her play, I have come away with a different song in my head. They are all earworms. They are all catchy. If pressed I probably say “Grimshaw and the Fingerclaw”. Or maybe “Sweet Jonathan”. Or “Daffadilly down”. Or…   You can see were this is going, can’t you! 🙂 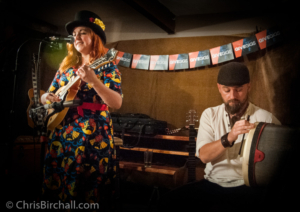 The three covers she sang were all old favourites of mine even before I’d ever heard her lovely versions: Sandy Denny’s “Who Knows Where the Time Goes”, “Humble Me” by Nora Jones and especially that lovely old traditional folk song made popular by Christy Moore, “Black is the Colour of my True Love’s Hair”.

It was one of those evenings you really didn’t want to end, but when it did, it was Elfin Bow’s hand-clapping, foot-tapping upbeat song, “Prairie Madness” that sent us all home happy bunnies.

As is the tradition on our Showcase nights, the first and the second halves of the evening were opened by a round of floor spots from our regulars. Tonight we heard from Keith, Jim, Glyn, Chris, Peter, Penni, Robin, Richard, Lynda, Tom, Joe, Neil and Enid. 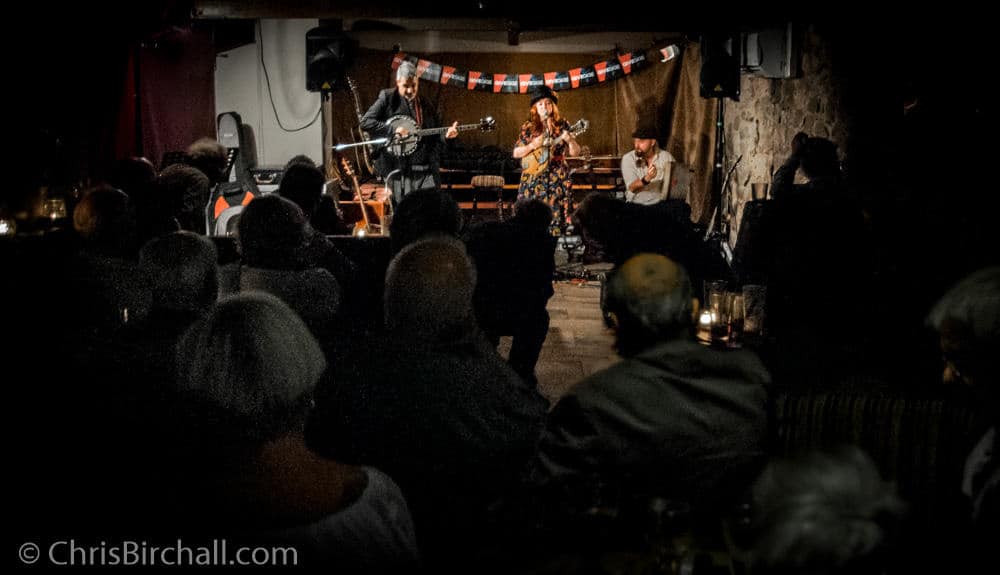