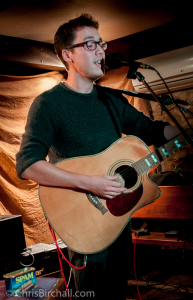 The weekly Ruthin AllStyles Folk & Acoustic Singers Night has become a firm favourite in the music lovers’ calendar, attracting performers and audience members from all over the Vale of Clwyd and beyond.

One such visitor, last bonfire night, was a young man from Bath by the name of Chris Yeoh.  He turned up at The Feathers out of the blue, to do a floor spot and went down so well on the night we got him to tag an extra couple of songs on for the finale spot.

Chris must have enjoyed performing as much as we enjoyed listening, because he’s asked whether we would like to have him at the club again. (Although I suspect the real reason is that he’s hoping to win another tin of Spam in the raffle! 🙂 )

Coinciding with the release of his forthcoming CD, Chris is making Ruthin AllStyles the first gig on a tour of the North West to promote the album, and will be performing an extended spot to showcase half a dozen or so of his new songs.

As is usual on Showcase evenings, Club members will be performing floor spots before and after Chris’s spot, providing a broad mix from Folk to Blues to R&B, from Country to Celtic to Charts.

So do come along to join is for a great evening’s entertainment. And of course, as well as the prospect of a Spam booby prize, there is always a bottle of wine to be won in our raffle!

Entrance is just £1.50 (including raffle ticket).