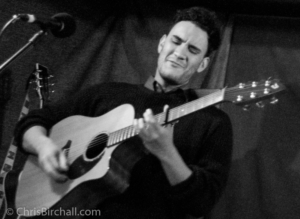 Standing in the post office queue earlier in the day,  I remarked to a friend that it was “cold enough to freeze the balls on a brass monkey”.

A lady in front turned around and tutted at me as if I’d uttered an obscenity.

Whereas it is in fact, a nautical term. A Brass Monkey was the tray alongside the canon on sailing ships in days of yore, and when the temperature dropped so low as to freeze the salt water, the canon balls remained firmly stuck to their brass receptacle. Hence the phrase…

Well, cold as it was, no brass monkeys were harmed in the making of what turned out to be yet another fab night of music at the club. The temperature kept our numbers down to a touch below thirty, half of whom were musicians in fine fettle. 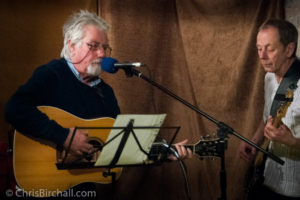 Jabberwoky got things warmed up with “Midnight Train to Georgia” followed by Talk Talk’s “It’s My Life”. Mick apologised in advance for playing 80s electro synth pop at a folk and acoustic club.

There was no need for apologies. Ian, Gill, Gilly and Mick always go down well with their eclectic range of material, spanning the past fifty years or so. And it is this diverse and varied range of musical tastes that has made the club grow in popularity since it was renamed ‘Ruthin AllStyles’ by John Rowell over a decade ago.

Then things took on a nautical theme as Jack Eagle sang “Submerged”, a song he’d been inspired to write after recalling his childhood swimming lessons in the sea. Richard Davies sang about the silver moon and the evening tide on “Blue Bayou”, and Enid Toft sang “The Water is Wide” to Neil’s guitar accompaniment.

New Faces
Liverpudlian Mark Miller, a first time visitor to the club. brought us two sailing songs from his home city which, in the eighteenth century, boasted the world’s first enclosed commercial dock. The first was Richard Thompson’s “When Johnny’s Far Away” and then the traditional folk song “Fifteen Miles on the Eerie Canal”.

Having just returned from a jaunt on his narrowboat, Robin the Busker chose dry land songs, and his set included “Copperhead Road”. 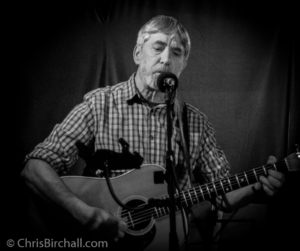 Another new face (at least, stage-side) was Ken Mazey. He was in the audience last week, just to ‘suss us out’, and this week came armed with a guitar.

Ken confessed to being very nervous as this was his first ever performance in public. He gave us songs by Kenny Anderson, Joan Baez and Ralph McTell and acquitted himself admirably, with gentle flowing finger-picking style on his guitar. 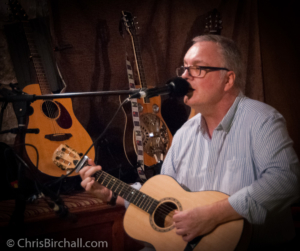 Lynda Degney’s set included songs from Alison Moyet and Crosby, Stills & Nash, Then came Joe Lyon’s turn with Helen Shapero’s “You Don’t Know”, followed by “Somewhere Only We Know” by Leane, and finishing with “The Goodnight Song”.

It was almost time to say goodnight, but first we were treated to a rousing set from Jabberwocky, which included “Price Tag”.  What can I say… Ka-Ching! This is one of my favourites of theirs – and from Mick’s days with Raven. And I’m not alone it seems, because it had been requested by Rhyl Acoustic Club’s host Neil Webster, who was in our audience tonight. 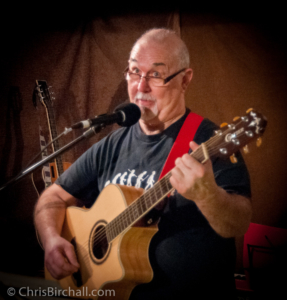 The big bonus of the evening though, was that you didn’t get to listen to my warbling, as I was nursing a dodgy throat. If I’d tried, it would definitely have turned out kara-croaky!

It was a fine and varied evening’s entertainment, as good as you’d get anywhere, and all for thirty bob!

Same again next week. Another Singers’ Night, but with added laid-back blues from Wendy and Andy, the duo known as Almost Blue.