The days before had been among the hottest February days on record but as we made our way to The Feathers on Thursday, coats and wellies were the order of the day. The weather had reverted to something more seasonal.

In recognition of this, Peter Leslie opened the proceedings with his own compositions “Relentless Rain” and “This Island”, followed by Paul Simon’s “America” during his second spot.

Next up was Richard Davies who took us on a walk down “Baker Street” accompanied by John Rowell on the six-string bass and with Tom Degney’s mandolin very effectively providing the saxophone part.

It was great to see Peter Stevens back at the club, opening his set with Tom Paxton’s “Comedians and Angels”.

Tom Degney had also accompanied Peter and now swopped his mandolin for the guitar to perform with his good lady, Lynda, on “The Ballad of Sally-Ann” and Christy Moore’s “Ride On”. Then it was back to the Mandolin for his own instrumental composition “The Road to Dent”, before finally returning to his seat in the audience for a well-earned rest.

Then we were mesmerised by the finger-picking dexterity of guitar maestro Skeet Williams with his instrumental arrangements of Roland Orzabal’s “Mad World”, made famous in 1982 by the band ‘Tears for Fears’, and Paul Simon’s “Bridge over Troubled Waters”.

Pete Kirkham was next up with Gnarls Barkley’s “Crazy” and Bowie’s “Heros”.

Joe Lyon nodded in the direction of John Denver with “Today”, before singing about Liverpool in “My Home Town”.

I followed with a couple of Eagles numbers before welcoming Cath Bryan to the stage where she treated us to a lovely version of Dolly Parton’s “Little Sparrow”.

Rhyl folk singer Dave Noakes gave us “Love, Me”, the 1923 song by Collin Raye, followed by the beautiful old Irish song by Paddy Reilly, “Only Our Rivers”.

Also from Rhyl, Brandon Ridley opened his set with “Light a Spark” from his just-released album “Mighty Fine, Broke and Free”, followed by a cover of the Andrew Combs song “Emily”.

Opening his set with Bob Dylan’s “I Want You”, Neil Martin entertained us in his own inimitable style, finishing with the Bee Gees number “To Love Somebody”.

Taking us up to the (rather late) mid-evening break, Jane Allcock & John Bass performed three fabulous instrumentals from their new collaboration with Jane taking the lead in each, respectively on Clarinet, Saxophone and recorder. All three were classical numbers performed with the unlikely and somewhat unique pairing of woodwind and electric bass. The result left us spellbound. Paul Reed’s “Theme from The Victorian Kitchen Garden” never sounded so good. Click the ► below to hear a clip from this and the other two numbers they played. 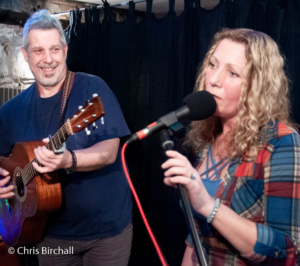 After the raffle was drawn, it was obvious there’d be insufficient time remaining for all sixteen musicians to have a second spot, so we put all the names into our the random name selector.

“Ooh, it’s a bit like the lottery,” one person remarked. Well, perhaps more like tombola but this is proving a fair method of doing it.

The final “lottery” winner was Peter Stevens who performed a belting finale of “Silvia’s Mother” along with Tom Degney and John Bass, taking us nicely up to four minutes past eleven.

Next week we have an intimate concert by the amazing Gary Edward Jones. There are still a few tickets left (eight at the time of writing) so grab yours NOW from https://www.wegottickets.com/event/463204. Regular members can get their concessionary tickets by sending a text to Jayne and Chris on 07760 764441.