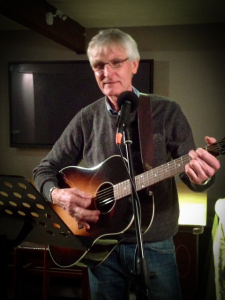 With Chris & Jayne away in Liverpool, soaking up the “Dire Straits Experience” at the Philharmonic, Joe Lyon stepped in as MC.  He also did a fine job of operating the mixing desk, whilst Ros & John looked after the door.

Several other regulars were missing too, also having absconded over the border to see the “Transatlantic Sessions” at Manchester’s Bridgewater Hall. Well it was billed as “The finest folk sessions from both sides of the Atlantic”. so I suppose we can forgive them! 🙂

The result was a quieter night than usual at The Feathers – but an enjoyable and entertaining one nonetheless!

Ros and John kicked off the proceedings, with John doing a tribute to Terry Wogan singing “Here, There and Everywhere” which was apparently one of Sir Terry’s favourite Beatles songs. Duetting, they then aired a new addition to their repertoire “Under The Board-walk”.

Another first time out song was “Don’t Cry For Me Argentina” by Enid & Neal.

There was a new visiting performer too – a gentleman with the good Scottish name of Rob.  And the traditional Highland Airs that  he sang a Capella, with a mighty fine voice, were very well received!

When Joe took to the microphone and realised Ros was aiming a camera in his direction, he burst into an impromptu rendition of Joe Brown’s “Picture of You”. Great stuff!

It was an evening low in numbers – but as the new man Rob remarked, high in quality. And he’s promised he’ll be back at the club soon!

Thanks to Ros and John for providing the pictures and a résumé of the evening.
Another Folk & Acoustic Singers’ Night next week
See you then!

Penni for your thoughts 4 Songbirds, 6 Crooners and a Croaker