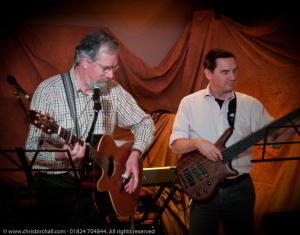 Wow!  No fewer than fifteen performers stepped up to the stage, many of whom changed their names thanks to yours truly having a senior moment or two!  Sometimes, it seems, my train of thought leaves the station without me!  So apologies to Joe who became Geoff and Geoff who became Joe.  And I think Harry became Tom at one stage.  You get the picture!

Still it made for another busy and entertaining evening, kicked off by Stephen who was accompanied by Mark on bass.  Mark ended up having a busy night on bass as well as doing his own solo spot. 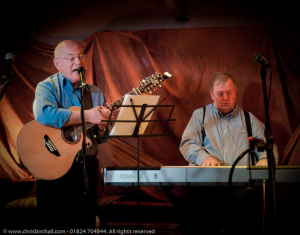 Other solos followed from Geoff, Joe, Peter and what’s-his-name… Oh yes, me! John and Ros came up as a duo and as backing singers for each other with a fine varied set.

The boys were back in town.  Well some of them. It was Tom Dick and Harry but minus Tom and with the addition of Emyr on keyboard. What a great set, starting with Harry’s beautiful version of Desperado accompanied only by Em on electric piano. 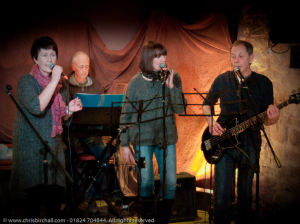 And the black and white ivories took even more tickling when Ian, Gill, Mick and Gilly came to the stage in the form of Jabberwocky.

Their version of Duffy’s Mercy is one of my personal favourites and it was still ringing in my head long after The Feathers fell silent and we’d finished packing away.

Another singer’s night next week and it will be hosted by Joe who will no doubt get his own back by calling me Fred!

See you all then!