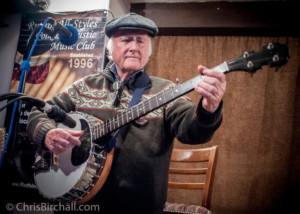 They say you can tell a professional musician by the amount of gaffer tape holding his guitar case together. But also, it seems, by the tonal quality of his Asda Wooden Nut Tray 🙂

Our resident master of the stringed instruments, Mr Tom Degney, had acquired a pot (body) and drum head that was once part of an old fretless banjo that didn’t sound too good. 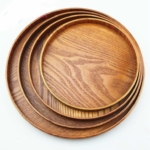 He’d sourced a new neck, fretboard and tailpiece. All he was missing now was a resonator for the back, and that was quickly resolved by a visit to his local supermarket where he found a wooden nut tray that was exactly the right size.

Tom disappeared into his workshop in Rhos on Sea and emerged a few hours later with a fully functional, and great sounding, banjo. Take a listen below…

In addition to letting us hear his new toy, Tom also sang what now seems like “Ages and Ages Ago” and accompanied his wife Lynda who, it seems, was intent on killing us all “Softly with her Song”.

Making his Ruthin AllStyles debut was Conwy musician Dez Owen, a prolific member of the live music scene for many years. Dez treated us to a couple of great sets that included classics like “Speed of the Sound of Loneliness”.

We learned about Peter Leslie’s new pastime, building rock sculptures. Glyn Hudson descended from the hills to ‘sing in the valley below’, and Richard Eastwood ‘Cashed in’ on his time at Folsom Prison. Meanwhile Wendy had been to Beijing to count all the nine-million bicycles.

We were serenaded with a “Hobos Lullaby” from Richard Ruthin, Chris let us into the secrets of his Brown Eyed Girl, and Brian Peters served up some superb slide blues on his resonator guitar.

Another great Singers’ Night coming up this Thursday.  See you there!