Festival Week Frolics at The Feathers 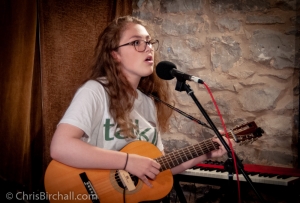 To help celebrate the 25th anniversary of Ruthin Festival, we held our own mini Woodstock with a Ruthin-centric Singer’s Night in which we showcased four local acts in the second half of the evening.

Fuchsia Jones
First up was Ruthin’s most promising, up-and-coming songstress, Fuchsia Jones. It was just thirteen months ago she made her first appearance at the club, since then we have watched this talented young lady blossom into a confident and polished performer.

The set comprised a string of lovely laid-back ballads that made the most of that beautiful pure voice of hers, and included “Tennessee Whiskey” and Lionel Richie’s “Easy Like Sunday Morning”. Fuchsia finished with the Chris Isaac classic, “Wicked Game”, which also happened to be the very first song she had sung for us back in May 2017.

Ceidwad y Gán
Another young performer whose progress we have followed is Harri Owen. He first turned up back in November 2016 with the only two songs he had learned to play. One of those was the Oasis song “Half a World Away” and we were knocked out by his gravelly, Gallagher-esque voice. Since then he has formed the band, Ceidwad y Gán, with bassist Oli Bradley-Hughes, percussionist Sam Moorcroft, guitarists Tomos Jones and Jake Vaughan-Evans. They played an absolute belter of a set that included a couple of good old sing-along Bob Dylan favourites “Wagon Wheel” and “Knocking on Heaven’s Door.

Earlier this year the band took part in the S4C Song For Wales competition, taking first place with “Cofio Hedd Wyn”, a song written and composed by Harri’s father, Bov Owen. And as they brought their set to a close with that song tonight, they roped Bov in to play the lead guitar part. 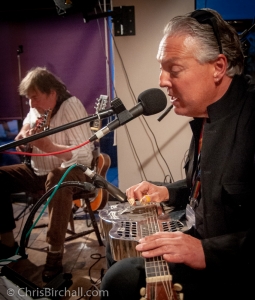 Chester and JonBass
Our third showcase act was Chester and JonBass. John Rowell has been a Ruthin AllStyles member since the club’s early days and his superb bass guitar skills have enriched a number of bands along the way, including Mantra, Raven and Breeze, earning him the affectionate nickname of John Bass.

This recent pairing with Chester Weiss has resulted in a steady stream of bookings all over the region and they are currently working on a soon-to-be-released album.

Chester is a master of the lap steel guitar and this evening we were treated to one of the finest blues performances you are likely to hear, concluding with the Robert Johnson classic, “Stop Breaking Down Blues”.

The set began with a beautiful song written by Harry Robertson, “Til I Danced With You”, followed by a string of our old favourites including the likes of “Same Old Blues Again” and “The Letter”, with the lead vocals alternating between Harry and Richard Davies. And for an encore, they had the whole room joining in with “Stand By Me”. 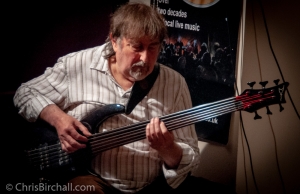 It was a fabulous evening of music served up by four excellent sets of musicians, each with their own distinctive style and thoroughly enjoyed by the packed audience in the function room.